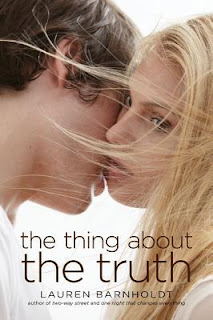 The Thing About the Truth
By: Lauren Barnholdt
Release Date: July 10, 2012

Description:
In this humorous love story from the author of Two-Way Street, an unlikely romance is the best sort of surprise—but the wrong secret can ruin everything. Kelsey’s not going to let one mistake ruin her life. Sure, she got kicked out of prep school and all her old friends are shutting her out. But Kelsey’s focused on her future, and she’s determined to get back on track at Concordia High.

Isaac’s been kicked out of more schools than he can count. Since his father’s a state senator, Isaac’s life is under constant scrutiny—but Concordia High’s his last stop before boarding school, so Isaac’s hoping to fly under the radar and try to stay put for a change.

When Kelsey and Isaac meet, it’s anything but love at first sight. She thinks he’s an entitled brat, and he thinks she’s a stuck-up snob. So it surprises them both when they start to fall for each other. Kelsey’s happy for the first time in months, and Isaac’s never felt this way about anyone before...But nothing’s ever completely perfect. Everyone has secrets, and Isaac and Kelsey are no exceptions. These two may have fallen hard, but there’s one thing that can ruin it all: the truth.
Posted by Cathy De Los Santos at 7:06 AM

I love romances that also have humour as well. I will definitely have to check this book out!

I'm also your newest follower :D Oh and thanks for stopping by my blog!

This one does look really great! I always enjoy Lauren's books :0)

On a massive contemporary kick at the moment so this looks fab - great pick! My WoW is here, if you'd like to take a look.

This one sounds so good! And the cover is so amazing. Fabulous pick!