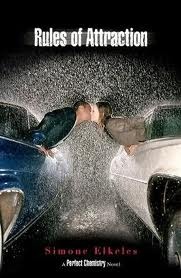 Description:
When Carlos Fuentes returns to America after living in Mexico for a year, he doesn’t want any part of the life his older brother, Alex, has laid out for him at a high school in Colorado . Carlos likes living his life on the edge and wants to carve his own path—just like Alex did. Then he meets Kiara Westford. She doesn’t talk much and is completely intimidated by Carlos’ wild ways. As they get to know one another, Carlos assumes Kiara thinks she’s too good for him, and refuses to admit that she might be getting to him. But he soon realizes that being himself is exactly what Kiara needs right now.

Review:
I don't know why I waited so long to read this book. I read the first book Perfect Chemistry a very long time ago. This book I read so quickly because I just couldn't put it down. Ever word had me glued to the page. It had everything I like in a good book.

We start out with Carlos being sent to live in Colorado with his older brother Alex (from the first book) because he got into some trouble in Mexico. Everything doesn't necessarily start out fine but it's manageable. Carlos goes to school and is stuck with a peer guide for the first week - in comes Kiara (I love the name by the way). She's going to have to show him around. Even though he is very good looking she just can't stand his attitude, and the fact that he ditched her so quickly. Wanting someone with more experience like Madison. But Carlos hanging out with Madison only bought him one thing. Trouble. The very thing he was hoping to avoid, but he is a rebel and a gang member that disappeared from Mexico. It was bound to happen.

At school one day, after a night of partying, the school is on lock down for a drug search. Guess where they find enough drugs to seem as if the person is dealing, you got it Carlos. So it's either he goes to jail or goes and lives with Kiara and her family. He really has no option so he goes and moves in with the Westfords, which includes Kiara's parents and Brandon her younger brother. Carlos ever the badass continues with his attitude. And Kiara still isn't too happy about it but there is something about Carlos that just makes her feel.

Throughout the book Kiara grows more confident with Carlos, and he starts to feel for her. Something he promised himself he would never do again. But Kiara trusts him, and that is something he is not used to. Of course he freaks out over this, but this does not deter Kiara one bit. She is still fully into him. Near the end when they are fighting or more like Carlos is attempting to stay away from her because he doesn't want anyone to get hurt, he gets into some trouble with the whole gang life. Finally he smartens up and gets help and with that they pull through, almost cleanly.

This was a really great quick and easy read and I'm so happy I read it. And I can't wait to read the next book which is about the last of the Fuente's brothers - Luis.
Posted by Cathy De Los Santos at 11:13 AM

I love this book! And I adore the cover. Great review!