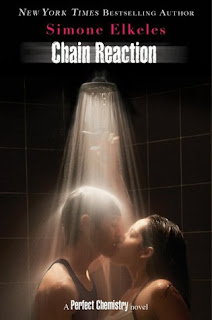 Description:
Luis Fuentes has always been sheltered from the gang violence that nearly destroyed his brothers’ lives. But that didn’t stop him from taking risks—whether he’s scaling a mountain in the Rockies or dreaming of a future as an astronaut, Luis can’t stop looking for the next thrill.


Nikki Cruz lives her life by three rules—boys lie to get their way, don’t trust a boy who says “I love you,” and never date a boy from the south side of Fairfield. Her parents may be from Mexico, but as a doctor’s daughter, she has more in common with her north-side neighbors than the Latino Blood at her school. Then she meets Luis at Alex’s wedding, and suddenly, she’s tempted to break all her rules.

Getting Nikki to take a chance on a southsider is Luis’s biggest challenge, until he finds himself targeted by Chuy Soto, the new head of the Latino Blood. When Chuy reveals a disturbing secret about Luis’s family, the youngest Fuentes finds himself questioning everything he’s ever believed to be true. Will his feelings for Nikki be enough to stop Luis from entering a dark and violent world and permanently living on the edge?

Review:
We are back again with the Fuentes brothers, this time we are focusing on the baby brother - Luis.  He's smart and has those Fuentes good looks, but he's the daredevil.  We start off with him climbing a boulder, without a harness or any safety equipment at all.  Of course he strangely gets bitten by a snake (who would expect that) falls and hurts himself.  This leads us to Alex and Brittany's wedding, where Luis meets Nikki, a hot Mexican who doesn't speak Spanish.  There chance encounter will stay with each of them for a long time.  But Nikki has her own problems.  Her boyfriend turned gang banger doesn't know she's pregnant and just dumped her.  The night of the wedding is when she loses the baby.

Fast forward into the future a couple years and guess who's moving back to Fairfield, Luis (this is where the wedding took place and where he met Nikki).   They are both seniors now and he is still as cocky as ever, and she has turned bitter since Marco broke up with her.  But there is an undeniable chemistry between the two of them.  They try to stay away from each other but it just doesn't work.

While Nikki and Luis are getting closer together, he starts hanging out with the gang his older brother was affiliated with.  Which also happens to be the one his father was killed by.  He starts doing drug runs, collecting money and just getting into fights and unnecessary things.  He had a plan, he was going to study, graduate, go to Purdue to study aeronautics, and one day make it off the plant to see it from the outside.  But one thing lead to another this chain of events just changed everything.  The deeper he got into the gang, the more he would lose Nikki, and felt as if he was not part of his family.

There are some really great intense moments just with Luis and Chuy the head of the gang, but then there are the sweet undeniable swoon worthy moments had between Nikki and Luis.  This book was great.  I really loved the epilogue and can totally see this Fuentes family going out for the long haul.  (Continuing the story with their kids).  This was great, I love Simone Elkeles books and I can't wait to see what she comes up with next.
Posted by Cathy De Los Santos at 11:05 AM