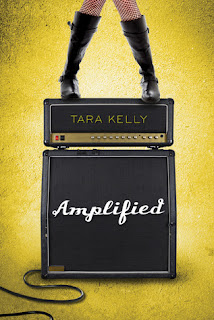 Description:
When privileged 17-year-old Jasmine gets kicked out of her house, she takes what is left of her savings and flees to Santa Cruz to pursue her dream of becoming a musician. Jasmine finds the ideal room in an oceanfront house, but she needs to convince the three guys living there that she's the perfect roommate and lead guitarist for their band, C-Side. Too bad she has major stage fright and the cute bassist doesn't think a spoiled girl from over the hill can hack it. . .


In this fresh new novel by critically acclaimed author Tara Kelly, Jasmine finds out what happens when her life gets Amplified.


We meet Jasmine just after she has left her house and is on her way to being free to explore her musical talents. Of course she leaves with all of her savings and not much else. When she gets to Santa Cruz her car decides to break down. At least it was in front of a body shop. It was going to take all her money to pay for that car. In the meantime she goes in search of a band and a room in hopes that she can find both at the same time. She tries out for a band called C-Side and they like her, at least the lead singer Veta does. It's instant, she is part psychic so she knows that there is something special about Jasmine. After a night in her car and a run in with Sean (part of the band and her first confrontation in Santa Cruz), she runs into Veta who gets her a job with her mom at the physic store as a cashier, and is made part of the group. After lying and saying she has played live in the past.


Sean and Jasmine's relationship grows day by day and I absolutely could not get enough of them. They seemed sooo perfect for each other. But he's not 100 percent over his ex - Amy. Who is/was with his ex best friend Teddy (who formed a rival band together). There is just so much going on and finally it's time for their fist live show with Jasmine. Which she of course freaks out because she's never done a live show. More drama after that especially from Bryn who thinks he owns the band.


Jasmine is now out to prove herself that she can do this and she wants to be in the band and stay in the apartment. She's basically fighting for her dream. Her and Sean still grow close but things happen, and he really isn't over his ex yet. The timing is just not right. They go on to their second gig with Jasmine and she rocks.


There is just too much going on but I can't get enough of it. The book is addicting, the banter between everyone is just addicting.


I was very mad when it ended because I did NOT want this book to end. I want to see what happens next, I want to go on tour with them. I need more of these people.
Posted by Cathy De Los Santos at 9:34 PM