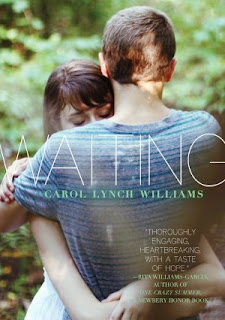 Description:
After her brother’s death, a teen struggles to rediscover love and find redemption in this gripping novel.

Growing up in Africa and Latin America as the children of missionaries, London and Zach were as close as could be. And then Zach dies, and the family is gutted. London’s father is distant. Her mother won’t speak. The days are filled with what-ifs and whispers: Did Zach take his own life? Was it London’s fault?

Alone and adrift, London finds herself torn between her brother’s best friend and the handsome new boy in town as she struggles to find herself—and ultimately redemption—in this authentic and affecting novel from award-winning novelist Carol Lynch Williams.
Posted by Cathy De Los Santos at 9:25 AM

Nice!! That sounds just like my kind of book :)

i love this cover. so sweet.

stop by my post? I'm hosting an exclusive cover reveal for a fall 2012 YA from Paper Lantern Lit and Philomel/Penguin!