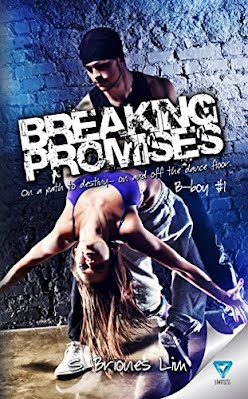 Fighting to piece her life back together, Aurora packs up and transfers to California State to start anew. When she arrives, her focus is on schoolwork and choosing a new career. But to her surprise, destiny has other plans…

Sucked into the world of competitive breakdancing, Aurora comes toe-to-toe with the hottest B-Boy of them all…

An arrogant hothead, Mitch Adachi—or B-Boy Kickwit as he is more commonly known—has life all figured out. He breakdances all day, practicing for upcoming competitions that are sure to challenge his skills—which means he has no time for distractions.

When the new girl steps into the scene, he sees an opportunity he can’t pass up…

Besides finding Aurora devastatingly attractive, he can’t help but notice her skills. He quickly develops high hopes for the ex-gymnast, seeing her as the perfect potential crewmember for the impending high stakes Battle of the Crews competition. All she needs is some fine-tuning.

When the two commit to a business relationship, a different kind of passion kicks into high gear. There’s no denying they groove well together, but there’s a chance mixing high-stakes competition with a fierce romance might lead to…
Breaking Promises.

Review:
I’ve always been interested in things about breakdancing, the culture, the people, the dancing, it’s all pretty crazy and an exciting lifestyle.  After movies like Step Up and any dance movie really you can’t help but wonder about that world.  I’ve always loved hip hop so it goes hand in hand so when I saw there was a series that was written all about breakdancing and the people in it I couldn’t resist, I knew I had to read them all.  S. Briones Lim did an amazing job bringing this culture to life in her books.

To start the series off we meet  Aurora who is an ex gymnast, after a big fall she couldn’t help but move away to find something new to fill the void and fear she feels after her incident.  She moves away to a new college to try and find herself and what she’s going to do with the rest of her life.  She’s pretty bitter in the beginning of the book, but I think it’s that bitterness that made her such a fierce character.  Especially after she has a run in with cocky Mitch Adachi, aka Kickwit.

Mitch isn’t the type of person to run away from a challenge and he knew that Aurora had something special, it was just breaking through to her layer by layer that made them such an interesting couple.  They definitely felt as if they fed off each other in the best way possible.  But still the competitor in both of them did get them in a slight bit of trouble, but still it was the good kind of trouble.

This first book really focused a lot on break-dancing and the life of a b-boy, the utter cockiness they have, but also the realness of the sport.  It was really interesting to watch the characters grow and realize their worth.  Also to get rid of their fears and move on with their lives, sometimes facing those fears are the hardest things, but once they are faced there is no better victory. I thoroughly enjoyed all the characters, the dance moves exhibited throughout the book and the friendships that were formed. 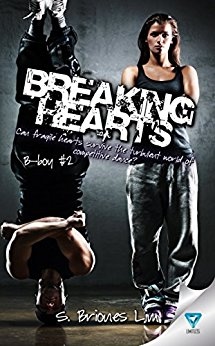 Known as shy and insecure, eighteen-year-old Estelle left for college with the hope it would bring an adventure of excitement and discovery, and give her plenty of room to spread her wings. But she couldn't have predicted how many changes she’d face—or that one of them would be named Jacob…

After meeting Jacob, Estelle is determined to win his heart. When she stumbles into his world of breakdance, she falls in love with its culture, music, people, and most of all—the realm of competitive dance. For once in her life, the spotlight shines on her, forcing her out of her introvert ways.

When Estelle’s plan to win over Jacob backfires, even a new, exciting life can’t heal her broken heart. And as the years pass, Estelle lives with heartache of a once in a lifetime love slipping through her fingers.

Will they ever have a second chance at love? Or will Jacob continue with his dangerous trend of…

We meet Estelle, who besides the fact that she’s described as Mila Kunis lookalike is a complete wallflower.  She’s never been anywhere or done anything.  She’s ready to get out of her studious comfort zone and experience college the way it’s supposed to be experienced.  Of course she take several bad advice from her roommates but everything happens for a reason.   Estelle is briefly shown the world of break-dancing, and she falls in love, practically drooling, especially over one b-boy in particular.  Spinja.  What a great B-boy name!

The cover I don’t even think does him justice by the way I picture him in my mind but Estelle is one lucky person!  At first he completely seeks her out but things happen and other people are in the way that you just can’t help but try and root for these two to finally realize what’s right in front of them.  How this differs from the first book is that not only does this book take place in college, but it fast forwards a couple years when they are out in the real world living their adult lives.  I love that this series is not stuck in one timeline but explores different ones.

It’s very hard to make it after college, especially doing something like b-boying but one thing leads to another and Spinja and Estelle meet again.  The two of them were intriguing and I loved that they were locked in an office for what seemed forever.  I couldn’t help but love the fact that throughout the book it went back and forth from past to present and I was itching to find out exactly how they got into their current predicament.

Overall this was another great story in the B-boy world, with really great characters overall.  This bought you a whole different view on relationships, careers and of course what could happen in the future, you just never know who you will run into.  The world is a very small place.  Love this book and the cover, and Spinja I don’t know it’s like I have a soft spot in my heart for the B-boy with such a big heart! Mallory Carmichael is a pianist who just lost out on the biggest solo of her life. To ease the sting, she heads to the club, where she meets Asher Nolan—a sexy dancer with wicked confidence in his eyes. Mallory loses herself in a night of carefree passion. Little did she know that one hookup could turn her world upside down.

A man who knows what he wants, and how to get it…

Asher—or B-boy Hellhound as he is known in the breakdance scene—is a TV and movie star. He’s used to winning…until his breakdancing game spirals out of control.

After an uncharacteristic loss, Asher becomes convinced the mysterious girl from the club jinxed him. Wanting to reverse the hex, he searches for her online, and it’s not long before #Search4Mallory goes viral.

Mallory didn’t think she’d ever see Asher again, but when she discovers he’s searching for her, she agrees to meet…and quickly regrets it.

Asher convinces Mallory to help him find a supernatural cure for the “hookup jinx.” Navigating the world of mysticism may be challenging, but it’s even harder for them to ignore their growing attraction.

Can Asher ignore the temptation to hook up with his ‘jinx’ once again?

Will Mallory find the right balance between her crazy rehearsal schedule and helping Asher?

One thing is for sure, the only way to get over this hex is by Breaking Free.

Review:
The third book in the series bought out even more great characters, both in and out of the break dancing culture.  S. Briones Lim did a great job developing two characters who both needed each other but didn’t even know it.  The jinx is alive, or is it?  Maybe we should go to a psychic consultant to get it fixed?  Really loved this book.

We meet Hellhound, aka Hollywood because to everyone in the underground b-boy circuit he is a sellout, but hey sometimes you have to make a living right.  Then there is Mallory who is all about the perfectionism of her music on the piano, but even with being perfect there is something about her that is holding her back, performance.   Anyway the two have an amazing night, but it’s what happens afterwards that is the best part.

Asher is doomed, he is off his game and he can’t explain why.  I don’t know why men always have to take it to the extreme but they do and Asher is no different, the only thing he did differently was meet Mallory and hook up with her.  Of course this then makes her a jinx, and he needs to figure out how to get rid of this jinx he has going on for him.  This is where things get weird between them going to different places and different people just to get rid of the jinx, it’s funny sometimes.  Personally I always think it’s just in people’s minds, but hey what do I know, it’s not like I am a supernatural consultant.  Hilarious!

Anyway the more time Mallory and Asher spend together, they realize things about themselves.  Being together makes them stronger, they can conquer their fears and insecurities and that is what this book is really all about.  Getting over it, and doing it together as a team.  I think the relationship these two have is aspiring really.  I don’t think there was that much or as much b-boying as there was in the first book, but there was definitely a really great story none the less!

Overall what an amazing series, I absolutely love each and every one of the covers because the boys and the girls look so perfect and definitely how I pictured the characters if not close to it.  The settings are great, I love how the books did mention old characters especially during different battles.  Really great series, I think they can all be read as stand alone, but really why you would I don’t know, because then you wouldn’t get the experience or culture of all the different b-boys out there.  I’m not going to lie, I really went and looked up some of these break dancing moves.  Impressive stuff! 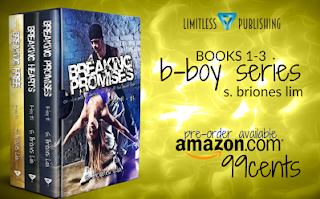 Author Bio:
Thanks to her Mom’s unwavering devotion to read a childhood bedtime story to her every single night, S. BRIONES LIM’s love for books began before she could even speak.
Raised in Southern California, Lim initially dreamt of becoming an artist. After a Psychology Degree (Summa cum Laude), a stint in Art School, and a career in Advertising/Media she is finally diving back into her first love – books. As a self-renowned bookworm, Lim’s love for reading has inspired her to pen her own novels and hopes her readers will fall in love with her stories as much as she enjoys writing them.
Her obsessions include time with family, Cherry Coke, popcorn with jalapeños, watching movies and her dogs, Tobi and Roscoe. She currently lives in Virginia with her husband.

Giveaway
Signed Paperback of Caught Inside or Palace Hills (winner’s choice).
U.S. only