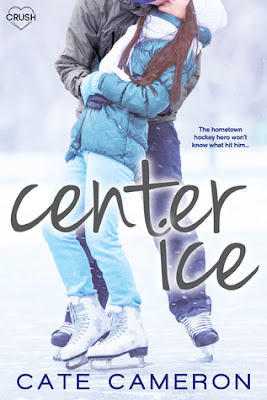 Description:
The hometown hockey hero won’t know what hit him…Karen Webber is in small-town hell. After her mother’s death, she moved to Corrigan Falls to live with strangers—her dad and his perfect, shiny new family—and there doesn’t seem to be room for a city girl with a chip on her shoulder. The only person who makes her feel like a real human being is Tyler MacDonald.But Karen isn’t interested in starting something with a player. And that’s all she keeps hearing about Tyler.Corrigan Falls is a hockey town, and Tyler’s the star player. But the viselike pressure from his father and his agent are sending him dangerously close to the edge. All people see is hockey—except Karen. Now they’ve managed to find something in each other that they both desperately need. And for the first time, Tyler is playing for keeps…

This was an absolutely loveable contemporary novel and a great start to a series.  We meet some really great characters who go through some tough times in their young lives.  It’s not always easy being young and going through things that are unexpected and unwanted, sometimes these things happen and they aren’t your fault but you are in them and you learn to deal with them.

We meet Karen who just went through a major loss and is now stuck with the family she never knew.  I know something like this can be tough for both sides of the family, but I think you always have to remember that it’s not the child’s fault, it’s the parent who is at fault.  There was a lot of hostility going around when she first arrived, which is not something easy to handle especially after her own situation.  But luckily she runs into someone unexpectedly who helps her sort through her own feelings.  This is where we meet Mr. Squirrel wrangler himself, Tyler.

Tyler is going through his own demands in his life coming from his own family.  It’s tough being on a major hockey team and possibly going pro, the people around you tend to try and ride your coattails, it’s even worse when it’s your own family.  Again he has his own demons to deal with and with Karen by his side, they work through things.  There were a lot of serious issues if you dig down deep between everyone in this book but its how they handled them that showed the kind of people they could be.

It was a very addicting book and I read it faster than I’ve read any book before because I really felt for the characters, they were relatable to my life in some ways and that helped.  Just remember it’s how you deal with things in life that make you the person you are, so suck it up buttercup cause life isn’t fair sometimes.  So after reading the third book in this series, I just had to go ahead and read them all.  I’m so happy I did, because I had no idea about the other characters and was just dying to know what happened to them or what is going to possibly happen to them, since it already happened. Starting from the beginning was definitely the right place to go.  I’m off to the next book!

I love this cover by the way it’s sweet. But I do have to say I never heard of these two characters skating together, still super cute cover.