Blog Tour: Falling for the Bad Girl by Nina Croft 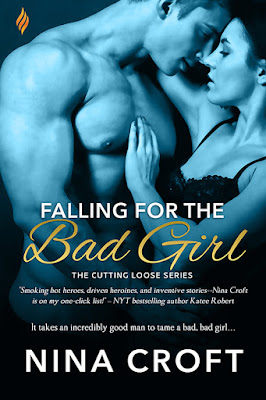 Description:
As a second generation detective, Nathan Carter is a cop, through and through, one who definitely sees things in black and white. But his work ethic—and libido—are thrown off balance when he heads up the case against jewel thief, Regan Malloy. Because with one sizzling look, she’s got him hot and hard. And he’s been that way, ever since.

Growing up, Regan’s favorite hobby was learning to crack safes, and she was very, very good at it. Still, she’d always tried to keep to the straight and narrow, and only strayed when she believed a friend was in desperate straits. Now she’s out of prison and starting over. If only she could forget that she’d spent the last three years fantasizing about the stunningly gorgeous detective who locked her away.

It’s inevitable that they meet up again—in bars, hotels…and hotel beds. Despite their differences, they can’t keep their hands off each other. Still, it’s just desire. If they give it enough time, it’ll burn itself out. Because a good boy and a bad girl can’t possibly make it work. Can they?

Get your copy today!

Oh the beautiful story of good vs bad, of two people who find each other irresistible but know they shouldn’t be together because of all the factors in their lives, but they turn out to be the yin to their yang.  It’s inevitable.  It’s destined in the stars.  That’s how I feel about the two characters in this new Nina Croft novel.  It’s bound to happen and who cares if one is a cop and one is a criminal, things happen and sometimes they happen for the best.

We meet Regan as she’s coming out of jail and the guy who helped put her in there is outside watching.  It’s an obsession, they had a connection at some point but for obvious reasons no one acted on it.  That is, until she got out.  Now it’s all Nate can think about, and Regan isn’t that far behind either.  Their relationship isn’t the most ideal but the two together have an undeniable chemistry.  They want to pursue something but at the same time they want to keep their lives very separate from one another.  It’s a lot easier said than done.

This book had a lot of undertones about trust, and family and going through things together rather than alone.  Sometimes you need that person to back you up and help you see the light in certain situations and I think that’s what they were to one another, but it’s difficult because again there were a lot of trust issues, one being a cop the other a criminal.  There were also other factors in their lives keeping them from completely committing, such as Regan’s family of criminals.

I love that this book was set in Europe, but I didn’t even realize it until a little bit into the book.  Then I started doing everything in an English accent in my mind while I read it.  Which anything with an accent is just that much more enjoyable, right?

Overall the book was a great read, a little slow in the middle but once it started picking up I just couldn’t put it down and had to finish it as soon as possible.  My favorite part will always be the family scenes because they were just too funny and I can completely picture them in my mind.  I enjoyed the characters, it wasn’t too raunchy which I enjoyed and the story was good.  Good vs bad can’t go wrong with that, although I really wouldn’t call Regan that bad, just at the wrong time and place with the wrong person and things happened.


Nina Croft grew up in the north of England. After training as an accountant, she spent four years working as a volunteer in Zambia, which left her with a love of the sun and a dislike of nine-to-five work. She then spent a number of years mixing travel (whenever possible) with work (whenever necessary) but has now settled down to a life of writing and picking almonds on a remote farm in the mountains of southern Spain.


Nina writes all types of romance, often mixed with elements of the paranormal and science fiction.

a Rafflecopter giveaway
Posted by Unknown at 12:00 AM