Review: The Sound of Us by Ashley Poston 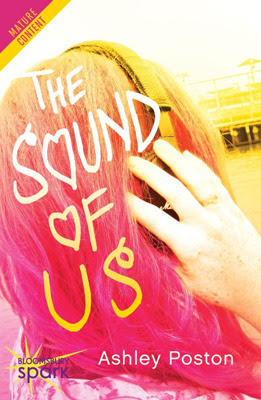 The Sound of Us
By: Ashley Poston
Release Date:December 19, 2013
Series: Radio Hearts #1

Description:
America's favorite pop band, Roman Holiday, is done, dead, and so totally last year. For eighteen-year-old rockoholic Junie Baltimore, this is music to her ears. But when she discovers their sexy ex-lead singer hiding out on the boardwalk, her summer vacation becomes the cover story of the year.

She's willing to keep him a secret, but when a sleazy paparazzo offers her the cash she needs to save the bar her father left behind, could she sell out for the chance to save her future? Who is she kidding? That's a no-brainer...but she never planned on falling head over heels for the lead singer.

I love music and usually have it on all the time everywhere around me.  I love all kinds of genre’s and when any music appears in any of the books I read I can’t help but fall in love just a little more.  Music evokes memories and words written on a page that you have the privilege of reading will also always evoke a memory.  Transporting you into another world and living the experience of all the characters, it’s a beautiful thing and I think Ashley Poston has a really amazing way of transporting you and making you feel for all the characters.  I loved this book as much as I loved the second book in this series, yes I read it out of order.  There’s something special about the writing, it pulls you in.

This is where it all started, Holly’s death, Roman’s disappearance and Holly’s memorial service.  Things happen, and sometimes as tragic as they are maybe they happened for a reason, I don’t necessarily know what the reason was, because nothing is too tragic that you need to take your life, but that’s beside the point.  We are focusing on Roman, he’s lost, but he somehow ends up finding Junie and with their small interactions a strong bond forms between the two.  I think it helps that they have both lost people in their lives that were close to them.  It’s what you do after the loss that matters most, keep those memories strong and be a better person.

I loved the interaction between all the characters, the constant music trivia between the two of them.  The realistic way they started to feel again and they felt something for one another, there was no insta anything.  It was growing, sure it was a short period, but it progressed over time and realizations.  Overall the relationships in this book were a pleasure to experience, I found myself feeling everything they would, wanting to google these people as if they were real people, it just felt that real to me.  As if I was reading an autobiography or something, it was just that good and realistic, because really it could happen maybe not to me but to someone out there it could happen.  For me it will just stay in my fantasies, cause who hasn’t fantasized about meeting a rock “pop” star.

The story flowed very fluidly, I didn’t feel like I was lacking anything other than I didn’t want their story to end.  It was beautiful really.  There are a lot of things to learn from this book, don’t believe everything you read, especially in tabloids.  Sometimes it’s hard to move on, but move on is something that needs to be done.  And famous people are regular people, they too have feelings and are just trying to live their lives.  Fame is just part of their job.

I think the cover is very cute, and I can’t gush enough about the book itself.  If you’ve never read it you should definitely pick this up, and the second book of course.  Because Ashley Poston is an amazing writer.  Loved it!
Posted by Unknown at 2:51 PM