Review: Meant to Be by Lisa Marie Perry 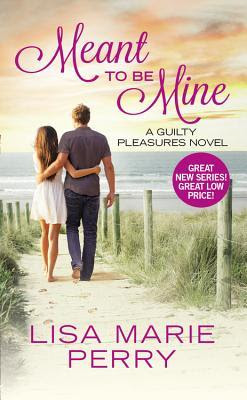 The first book in the Guilty Pleasures series.

Sofia Mercer may have been sick as a teen, but she's no delicate flower. And she's proven it by making it on her own and starting a new life away from the town that turned against her, away from the boy who broke her already fragile heart. But when her aunt

Luz dies unexpectedly, leaving Sofia with a mountain of regrets and the keys to a quirky boutique, Sofia has no choice but to return to Cape Cod. Only, this new life in her old town comes with complications.

Burke Wolf was Sofia's first love-a relationship that burned bright and went up in flames. Seeing him again, Sofia can't help but get caught up in that all-too-familiar tornado of passion and pain. He's battled his own demons-that much is clear. But Sofia can't afford to be careless with her heart . . . and loving Burke again might just break it completely.

Review:
This was a really great read with quite a bit of dirtiness involved that kept you interested.  The main characters were very good at avoiding each other and emotions when necessary but you can so obviously see that they were literally meant to be with one another.  You know the saying you complete me, I felt that between these characters.  They helped to complete one another.  I haven’t read anything from this author previously but I will definitely be checking out future books in this series.  I just have to know what happens.

We meet Sofia and Joss who are on their way back to a small town to Sofia’s aunt’s funeral.  There Sofia runs into an old friend.  The two of them had quite the relationship but without one another they were definitely lost.  Years had passed since they last saw each other and many things have transpired since then, they were both troubled in one way or another as teens but as adults they still have some reservations about their relationships in life.  It was interesting to watch Sofia grow more into herself and believe in her dreams and how she was able to make them happen.

Burke on the other hand was very stubborn but he’s being held by a very thin line as he suffers from the worst kinds of addictions, but the resurrection of Sofia has bought him back to life in a better way.  It’s adorable to see how much he truly cares for her, how much he’s scared for her and how much he truly loves her.  Actions always speak louder than words and the two of them had quite the connection.  It was electric and intensifying.

The other characters in the book also were truly interesting as they too had their very own stories to tell so that’s definitely a reason for me to check out the rest of the series, because I definitely need to know what they are all about.  I’m invested and I just need to know!

Overall the author did a great job in explaining about all these characters, the hardships they endured throughout their lives, what they are still going through and what is yet to come.  The writing was great and kept you absorbed in the story.  The cover is also very interesting makes it look like a really great summer read, and it really is.  It also seems sweet and endearing, add the title to that and you’ve got a winner.  The bonus to the book were the naughty bits, and the naughty sweets.  You’ll see what I mean when you pick up this book and read it from beginning to end.
Posted by Unknown at 12:00 AM