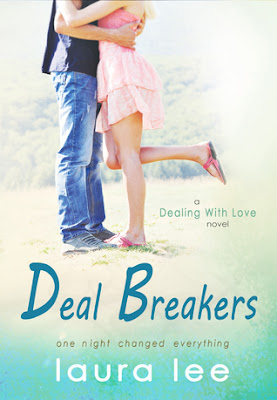 Description:
How were they supposed to know that one night would change everything?

Devyn has life all mapped out. She just needs to accomplish one more thing before graduating college and becoming a full-fledged adult—lose her virginity. And who better to assist her than her best friend, Riley?

Riley is the self-proclaimed king of fling. His college years have been filled with meaningless hookups until the one night that ruined him for all other women. The one night he spends with his best friend, Devyn. Right before he screws it all up.

Balls to the wall, baby!

Now five years later, Riley is determined to atone for his mistakes and prove that he can be the man that Devyn deserves. Little does he know that Devyn’s been keeping a secret from him all these years. A big secret. Now he has to figure out how to win back the only girl he’s ever loved while navigating the pitfalls of her unexpected revelation.

Deal Breakers is filled with lots of laughs, a sexy romance, and an overflowing swear jar.

Review:
I really enjoyed reading about these two who couldn’t really be more the same in some ways and completely different at the same time.  You could tell from the moment they met that they were perfect for one another.  But Devyn just wanted to be friends, isn’t that how it starts though.  The author did a good job of depicting both their lives together and separately.

I really enjoyed reading about their college years and how the two got along so well, Riley tried so hard to be with Devyn then but it didn’t happen until the very end when they were about to go their separate ways.  I appreciated how much the author spent on telling the story of their college lives and then moving on to the future and what was waiting for them.

The characters in this book were very entertaining.  Sometimes I didn’t think much of Riley only because he seemed like such a player that it turned me off but then there were sweet moments that made me rethink him.  Devyn on the other hand seemed very determined to keep on the track she started but as you will see something deters her, but she is still very determined and very naïve. The background characters like Devyn’s brother are just too hilarious and I can completely picture him in real life as a big bear who acts like he’s all tough but really just a big teddy bear.  And let’s not even start with the little guy.  Too cute for words is what he is! I fell in love with him right away, I love little ones and their honest mouths.  Be careful what you say around them because they are like little tiny sponges that soak it all in.

Overall this book was very enjoyable to read through and I was happy things worked out in the end for all the characters.
Posted by Unknown at 9:08 AM