Review: The Heartbreakers by Ali Novak 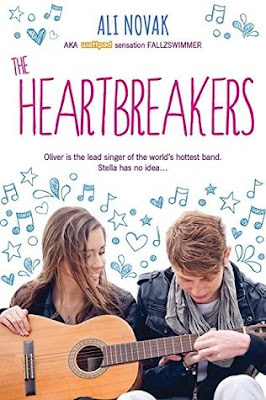 "When I met Oliver Perry, I had no clue he was the lead singer for The Heartbreakers. And he had no idea that I was the only girl in the world who hated his music."
Stella will do anything for her sick sister, Cara—even stand in line for an autographed Heartbreakers CD...for four hours. She's totally winning best birthday gift this year. At least she met a cute boy with soft brown hair and gorgeous blue eyes while getting her caffeine fix. Too bad she'll never see him again.
Except, Stella's life has suddenly turned into a cheesy love song. Because Starbucks Boy is Oliver Perry – lead singer for the Heartbreakers. And even after she calls his music crap, Oliver still gives Stella his phone number. And whispers quotes from her favorite Disney movie in her ear. OMG, what is her life?
But how can Stella even think about being with Oliver — dating and laughing and pulling pranks with the band — when her sister could be dying of cancer?
Review:

Have you ever read a book that made you feel super giddy inside?  Even brought back memories from when you were younger and in love with a boy band (mine was New Kids on the Block yes I just showed my age with that statement).  The happy carefree days when all you had to worry about was school, well this book bought back that feeling even though they were dealing with more life altering situations and decisions.  This is the first book I’ve read by Ali Novak, and I’m definitely picking up her debut novel because that’s how much I loved this book.

We first meet the triplets – Stella, Drew and Cara.  The three of them couldn’t be more different from one another but they have an undeniable bond (being triplets and all) and they would do absolutely anything for one another.  Even in Stella and Drews case waiting four hours in line listening to The Heartbreakers a band they both can’t stand just to get something signed for their sister Cara, who has cancer.  They want to out beat her in the birthday gifting this year.  This is where Stella accidentally meets the lead singer but doesn’t even know that she’s met him before.  It’s sweet, unexpected and you have no clue how many times I’ve wished when I was younger something like that would have happened to me.  Adorable to say the very least!

With their chance meeting, Stella and Drew befriend the band and a connection is made.  It’s so much fun watching their antics trying to have a good time, it’s as if the two of them bought life back to the band.  It changes everything for them without even realizing that they needed that extra push.  Stella has an opportunity but is torn what to do because she wants to be there for her sister.  Overall I think she made the right decision in trying to live her life to the fullest, even though at times she’s scared and still hiding behind things, so is Oliver (the lead singer of The Heartbreakers).  They both have a connection with one another but something is always holding them back from fully committing.  Fear.

I don’t want to give too much more away from this book but if you need a good book to read then definitely pick it up because not only is it funny but there are emotional parts and even a lesson to be learned.  Remember to live for yourself, it’s okay to be happy.  I enjoyed all the characters in this book, especially all the interactions with the band, JJ is just too funny.  Alec there is something going on there and I know it, but I can’t put my finger on it.  Hopefully one day we’ll find out and Xavier is just a sweetheart.  I know it says #1 in the series so I hope we get to learn more about the rest of the band in their own books.

Can’t get giddy enough about this book, it’s great, pick it up, read it, love it!!! The writing was great and had me laughing, crying and very involved with the characters.  The cover is completely adorable and if I saw it in the store would pick it up in a heartbeat.  It’s sweet and really represents the book well.  Now can I find myself an Oliver please lol, but maybe without all the games? J
About the Author:
Ali Novak wrote her debut novel My Life with the Walter Boys when she was just 15 years old, and has since penned her next book, The Heartbreakers. First a hit on the online community Wattpad, her second novel has over 38 million reads and is loved by readers around the world.
Disclaimer:
I received this book from NetGalley and SOURCEBOOKS Fire, so that I may give my honest opinion and a review. Whether it is good or not please do not let it discourage you from purchasing/reading the book yourself and forming your own opinion. What might be good for me may not be good for you and vice versa. With that said, Happy Reading Everyone!!!