Review: Remember When 3: The Finale by T. Torrest 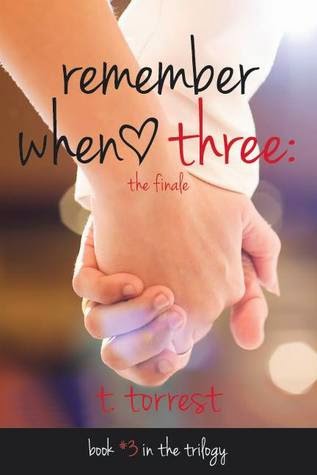 Description:
"I’d spent too long in limbo.
It was time to put The California Plan back into effect."
~Layla Warren

I’ve been in love with Trip Wiley since I was sixteen years old.
Yep. That Trip Wiley.
Academy award-winning actor, known philanthropist, People’s Sexiest Man Alive two years running…
Yeah.
It’s not like I’m some delusional stalker-fan. It just so happens that he was my high school sweetheart back in 1991.
In the years since, he’s simply been The One That Got Away.
We just can’t seem to get on the same page at the same time.
Our timing may have sucked, but the feelings had already been confirmed. Years ago.
At least his were.
He doesn’t know that I had chosen to love him back.
I need to fix that.
And I need to do it now.


Remember When 3 is the third and final book in the Remember Trilogy.
It’s a story about taking chances and following your heart…
and knowing that sometimes, you just have to learn when to let go.

**Intended for ages 18+ due to some questionable language and graphic sex.**

First off let me just say that I love reading series when they have been completed, this way I don’t have to wait in undying anticipation for the next book to come out, because it’s already there.  T. Torrest has taken me on a journey between these two characters that I have fallen in love with and this last book did not disappoint, because everything is not always greener on the other side.


This was definitely a great ending to an amazing series that I have happily read through and through.  Trip and Layla obviously belong together, ever since high school when they first met; there has always been something strong there between the two.  They just needed time to figure everything out first before they could be together.  You know there’s a lyric to a song that goes:


Would have come back for you, I just needed time
To what I had to do, caught in the life

This pretty much sums up the both of them.  They both had to figure out what their purpose was in life and how to deal with it, but more importantly how to deal with it together.  That’s what this book was about, Layla finally makes the plunge and gets back together with Trip (it happened suddenly during a tragic time), but they put all their eggs in the basket and just went for it.  But you know it’s not always so peachy keen sometimes life gets hard and it’s how you deal with them that make you the person you are and that shows what type of relationship you really have.


It’s always hard trying to find the right rhythm of life when being together, but it’s worth it in the end.


Overall this book was just as amazing as the other two in the series and it literally left me with watery eyes at the end and my hand to my heart because it was just that perfect.  If you read anything this year at least read this series it will bring you up and down and most importantly up again to such a major love high.  Big Smiles for this series!


I love the cover as much as I’ve loved the others because it’s simple and it’s only about them, not about anything outside of them just the two of them.  Everyone made a little appearance in this book, even unexpected characters but again everything had to happen for a reason.  Perfect series.  Thank you to T. Torrest for writing it.
Posted by Cathy De Los Santos at 2:58 PM