Review: Remember Me 2: The Sequel By T. Torrest 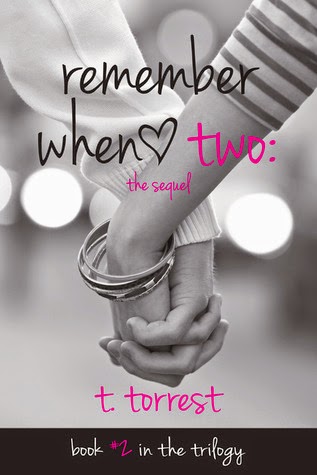 Description:
You know how sometimes, your high school crush grows up to be an insanely famous movie star? Okay, probably not. But I do.~Layla WarrenBack in high school, Trip Wiley’s fanbase only encompassed the denizens of the nothing little suburb of Norman, New Jersey. Ten years later, all that is about to change.In the summer of 2000, Layla Warren is enjoying her career as a journalist in New York City (well, sort of), while Trip spends most of his time grabbing Hollywood by the balls. In the days before what will turn out to be his skyrocketing fame, they’ll find themselves confronted with some life-altering choices. Remember When 2 is the second story in an NA romance trilogy. It will bring you back to that exuberant and riotous time of life in your twenties when you struggled to figure out your place in the world and the person you were meant to be……and the person you were meant to be with.**Intended for ages 18+ due to some questionable language and sex.**

I didn’t think this series could get any better, but it really did and T. Torrest has totally caught my attention.  With writing first about the nineties and now writing about what happens after college, the whole find yourself stage of life that we like to call our twenties.  It’s an adventure that I’m happy to be on and I love me some Trip and Layla because the two of them spark my interest and I’m not getting enough of them right now.  Kind of sad the next book is the last one in the trilogy but let’s focus on this one first.

So we meet up with Layla again after college and now working in the real world trying to become a reporter at a small insert newspaper.  But she’s having a hard time getting an in even if she is dating the boss.  But that’s all beside the point because she finds out that after nine years Trip is in town and he can become her in to becoming the reporter she wants to be.  Especially now that Trip is the up and coming it boy in movies.  But this isn’t just a regular type of reunion, the two of them have something magical that they share and have always shared since the very beginning.  I know that my heart dropped at the end of the first book and this book just added to that because my emotions were up and down.

Throughout the whole book you couldn’t help but root for the two to finally get back together, but there was always something in the way.  Or someone.  Either way there was a lot of back and forth between the two of them and still you just want them to figure things out and go with it already.  I love their relationship and I’m excited about them finding one another again.

All the old characters are back in this book including her best friend Lisa who is definitely a great help for Layla, everyone needs someone to talk to and just let everything out.  There are also some new people but still nothing surpasses Trip and Layla.  There are some things that concern me about where Trip is going in his life but I’m hoping he will straighten himself out just a little bit, but then again Layla could use some realization as well.

Overall this book was yet again an amazing read by this author and from this series and I’m off to read the final book (tear I’m going to miss them) and I’m hoping for some more great stuff and not another cliff hanger that makes me want to pick up the book right now.  You definitely have to read this series, it’s worth every word.
Posted by Cathy De Los Santos at 12:00 AM