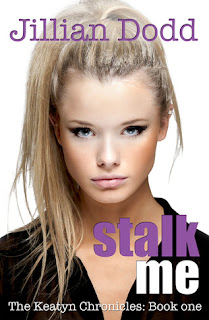 Keatyn has everything she ever dreamed of. Her life is following the script she wrote for the perfect high school experience. She’s popular, goes to the best parties, dates the hottest guy, and sits at the most coveted lunch table.

She’s just not sure she wants it anymore.

Because really, things aren’t all that perfect.
Her best friend is threatening to tell everyone her perfect relationship is a scam.
Her perfect boyfriend gets drunk at every party they go to.
It’s exhausting always trying to look and act perfect.
And deep down, she isn’t sure if she has any true friends.

To add to the drama, her movie star mom’s long-time fan has turned stalker.
An older man is flirting with her and telling her they should make a movie together.
And she’s crushing on an adorable surfer. Dating a guy like him would mean committing social suicide.

So she writes a new script. One where all the pieces of her life will come together in perfect harmony.
But little does she know, there’s someone who will do anything to make sure that doesn’t happen.

****************************************
Review:
This book did not disappoint in the least, when I was reading the book I really felt that whole Gossip Girl meets Hollywood (Malibu) vibe. You have main characters who are all children of famous celebrities, producers etc, all living a luxurious life but trying to be normal. There is no such thing as normal as soon as everyone realizes that we can all get along, he he, and back to the book.

We meet Keatyn whose boyfriend is drunk somewhere during the party and never wants to pay her any mind. I immediately had my suspicions about him; I can’t believe how some people just don’t notice what is right in front of them, seriously. Anyway so she spends time with her good friend Cush, who is always hitting on her, she realizes maybe it’s time to dump her boyfriend and go for the surfer boy she’s been in love with for years, Brooklyn. Which I absolutely love the name. She does just that but then it seems as if maybe Brooklyn really isn’t that into her.

She moves on to Cush, who seems to have it bad for her, who knew he could have a girlfriend. But things transpire and there is a bad breakup which leads her back to Brooklyn. It’s all very much back and forth with the different guys; she just doesn’t know who she wants. Then comes the stress of a stalker out on the loose looking for her mother, or is he now looking for her?

Things become more intense and throughout the whole thing Keatyn is still confused about which guy she wants in her life. When the stalker turns out to now want her she is shipped off after her birthday party. She’s now attending a new school and has to try living a slightly different lifestyle, and yes you’ve guessed it there’s a new guy she’s got her eye on, Aiden. Can’t wait to see what progresses with those two in the next book.

Even though the book description seems to be more about stalking I think that’s more of a side story here. It focuses a lot on Keatyn and who she is, who she wants to be, who she turns out to be and also of course all the many men in her life. Who to choose it’s so hard, which team are you on? Make sure you check the book out especially if you like things such as Gossip Girl, The OC, and Mean Girls and even dare I say a touch of Sex in the City. It was an interesting read that really surprised me because I didn’t think I was going to like it but now I can honestly say I’m hooked, can’t wait for the next one! Jillian Dodd grew up on a farm in Nebraska, where she developed a love for Midwestern boys and Nebraska football. She has drank from a keg in a cornfield, attended the University of Nebraska, got to pass her candle, and did have a boy ask her to marry him in a bar. She met her own prince in college, and they have two amazing children, a Maltese named Sugar Bear, and two Labrador puppies named Camber Lacy and Cali Lucy.

She is the author of the That Boy Trilogy and The Keatyn Chronicles Series.

Follow the rest of the tour, check out the other posts below: