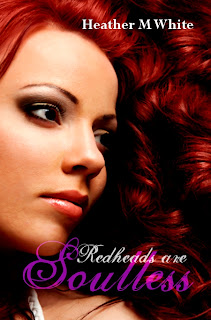 Description:
High school senior, Sofia Black, has had a very hard life. Since her father's death 7 years ago, she has had to look after her drug addicted, alcoholic mother. School isn't any better for her either. The other kids constantly tease, and ridicule her. All she wants is to get out of her small hometown in Alabama.

When new student, Jason, shows up, Sofia's world is turned upside down. She doesn't understand why he wants to befriend her so badly... And, just when she thinks she can trust him, trouble appears.

Jason's twin brother, Robbie, moves into town, and things go haywire. Sofia is now running for her life - and Jason is forced to share hidden secrets with her. She learns the truth about her father's death, and finds out that she may not be as "human" as she once thought. She struggles to accept her fate, while fighting for her life.

Just then, the classroom door opened and in walked a student I have never seen before. I wanted to look away, but I couldn’t. Something about this guy captured my attention. It was like my eyes were glued to him.


He walked to the front of the class with pride and dignity. His hair was black, but not in a gothic, I hate my life, way. More like a, I’m a rock star, kind of way. His bangs swept to the side, and normally I’m not into that, but it looked good on him. He was tall, towering at least a foot over Mr. Franks. His tight, black hoodie clung to his abdomen, and it was hard

not to stare at his rock hard muscles. He wasn’t big like a football player, but something told me nobody would want to mess with him.

His eyes met mine for a second, and the hair on my arms stood up. His eyes were solid black. But then, something unexplainable happened they turned to a golden brown color. I blinked a few times. My eyes must be playing tricks on me.

He winked at me, and I was finally able to look away. I was sure my face was as bright as my red hair.

I looked up again once I heard Mr. Franks voice. “Everybody, this is Jason Morgan. He has just transferred here from California.” He pointed to the empty seat beside me. “Just take a seat in the back, please.”

My heart sped up about a hundred beats a minute.

He would be sitting by me.

Of course he would, that is the only empty desk in the class. Nobody else wants to sit by me.

On his way back to the seat, I could see people were giving him sympathetic looks. Poor guy, having to sit by her, I hope he doesn’t get her herpes, I could hear them whisper.

I looked down at my textbook, ignoring the whispers, as Jason took a seat beside me. I could feel his eyes on me. I glanced up for a moment. Sure enough, he was looking right at me.

“I’m Jason,” he introduced himself in a whisper.

“I know. Mr. Franks just told the class,” I whispered back, hoping that my unkind tone would end the conversation.

“I was hoping you’d tell me your name.”

I tried to hide the surprised look on my face.

“Why would you want to know my name?”

“Well,” he paused for a moment, “we are going to be sitting beside each other all year. I should at least know your name.”

I glanced around to make sure nobody was looking. “You really shouldn’t talk to me,” I warned him.

“I’m kind of a freak,” I admitted sadly.

I sighed. “It’s your reputation at stake.”

“I think I’ll take my chances,” he smiled. “Are you going to tell me your name?”

“Well, Sofia Black, it is very nice to meet you.”

I turned my attention back to Mr. Franks, who happened to be standing right in front of us.

He tried to look mad, but I could see a smile beyond his angry face. “Since you two like talking so much, maybe you could show Jason around school.”

“I wouldn’t want to tarnish his reputation like that,” I protested.

“I’d love for Sofia to show me around,” Jason added quickly.

Mr. Franks smiled. “Then it’s settled.” With that, he walked back to the front of the room and continued the lesson.

My mouth hung open in disbelief. What was with this guy? Did he really have no self respect?

This book was entertaining, and a very quick and fun read.  The characters were interesting, but I think I most enjoyed the back and forth between the brothers.  That natural competition for the girl they both wanted.  That's always fun to read about, how one will out do the other.

We meet Sofie, who is a longer, and sometimes likes it that way but then again sometimes she doesn't.  She witnessed her father's sudden death when she was young and her mother is an alcoholic to the point that Sofie is the one to take care of her.  No one really befriends her at school because they believe her to be a freak.  That is until Jason comes to town.  Immediately he wants to get to know her and spend as much time with her as possible.  She's a little hesitant at first reminding him that he doesn't want to become an outcast like her.  But nothing deters him from wanting to be with her.

Things with her mother get better, but then they get worse again.  This is when Jason brings her into his home to protect her from his evil brother Robbie (who supposedly wants to kill her). Her being gone though seems to help her mother out in that she has bettered her life and is going to get married.  But being in the boys life she has cause turmoil between the two, who is bad who is good, doesn't matter because they both want only her.

Somehow tables turn and someone they thought didn't exist really does exist.  This is when all hell breaks loose.  This is where the twist hits and you know I almost didn't see it coming, almost because it's not exactly what I expected.  And I like that!

Overall: The book was good, and it was a quick read for me which is always good.  I can't wait to see what happens next with Sofie.  There were some really good moments in this book and some that just made me angry especially the whole thing with her mother, but maybe there will be light shed on that situation in the next book.  Good read, you should all check it out.

Characters:  I like Sofie, she's an outcast and they have always intrigued me.  The brothers are definitely interesting and I love that they compete for a while but then one of them gives up.  It's interesting.  I'm hoping to learn more about their history as they have a long one.  The mom needs to get it together.

Cover: Amazing, I don't have read hair and don't really think I could pull it off but sometimes don't you wonder what it would be like to have red hair.  Although I wouldn't want to be called soulless lol.  Great cover, can't wait to see what the next one looks like. 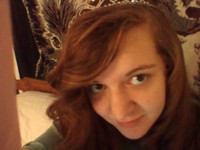 Hi! I'm Heather M White, a YA Paranormal author. I'm 22 years old and I recently got married. I just moved from Saint Louis, Missouri to a very small town in Arkansas. My passion is: writing. I also like to read, and play guitar. And I love Dr. Pepper!

Heather M White on the Web:


Buy Redheads are Soulless : these will be available when Release Day Hits May 25th!!
Posted by Unknown at 4:52 PM

I love red heads! It does sound like a fun read, I'm on a YA ban but in case I'm over the burn out, I'll keep my eye out on this one. LOL