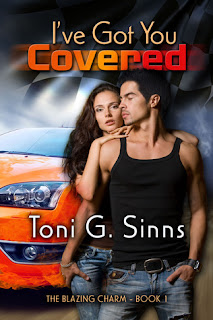 Anistasia moves to Brooksville where she meets John. The duo hit it off almost instantly and become best friends before it grows into something more than friendship. While they blossom together they have to go through the daily routine of high school drama and jealous ex’s on John’s part and over bearing brothers on Anistasia’s part. But each struggle seems to hold the two together even more.

Along with the daily high school problems they also have to deal with the mafia hunting down Anistasia, John’s mafia father, and the every other weekend street races. Running from bad guys, keeping the cops out of the know how, and trying to stay undetected is proving to be more of a handful when the only person you can trust is also on the run.

Cover - Let me just start off by saying that this cover is HOT, seriously.  It's probably what attracted me to the book in the first place.  I almost didn't think it was a young adult book and honestly I didn't feel it was other than the fact that they were young people in high school.  But still the cover is hot and it could have been used for a romance novel as well.  Did you not see the guy - yummy!

Characters - The main characters are Anistasia and John.  She's a tough girl with a very shady past that makes her wake up screaming in the middle of the night.  He's a tough guy, underground racer who is trying to protect his family from a father who needs to disappear for good.

On to the story.  Anistasia is new to school, she is constantly on the run from her past and is trying to be in hiding.  But she can't help to call attention to herself, usually she does not do it on purpose.  Here is where she meets John, he is immediately attracted to her and wants to befriend her.  But of course his jealous ex girlfriend (she thinks still his girlfriend) Rachel, tries to make it impossible for them to hang out.  But John finally breaks it down to her that no they are not together and he likes Ani so he will be with her.

John being a leader of an underground racing system dares Ani to race him, saying he hasn't been beat you so he believes he is the best.  She of course takes the challenge, and the race is good.  Reminds me of Fast and the Furious, that's what I was picturing in my mind while I was reading that lol.  I love that movie though so it's a good thing.

Anyway so after the races there is tension because the cops were coming and now they are all hanging out at a diner relaxing.  But the next day Ani gets something in the mail that makes her scream and pretty much check out.  Now she's on full watch from John's people and her brother.  Her past is coming back to get her.

I won't say more because really you should read the book.  But here are some of my thoughts, You can't always like every book that you read.  This book was passable in my opinion.  But really I wanted a little more depth in the characters they seemed a little two dimensional.  But overall the concept of the story was good, just needed a better execution.  But to each their own as you know what might not be good to me might be great for you.  So I hope you don't let this opinion deter you from reading the book because really everyone should form their own opinions.  And remember there is one super FINE man on the cover yummy.  So make sure to sign up for the giveaway below and ENJOY!

John had started piling a few things on the table, "I'll take her to the clinic tomorrow if she's not feeling any better. Anistasia and I are going for a picnic. She let me in her door so now I owe her a date." He didn't mention anything about Xander, he wasn't sure if Anistasia would want her to know, so he would tell his mom later and have her keep quiet about it.

Anistasia felt herself turn blush red at how that sounded. “You know you didn’t have to come in the door.” She smiled turning to look at John and the food he was piling on the table. “Then you wouldn’t have to be forced onto this date with me.” She couldn’t help but laugh at her words and smile. Keeping a straight face was a lot harder than it should have been. She walked over next to the table. “Do you want me to help you do anything?” She asked looking down at the array of food.

"Tell me what you'd like so we don't have to take so much." He said standing straight and looking at what he had gathered. "I'd hate to say but I haven't done this since I've been with Rachel, and she's an incredibly indecisive person." His mother cringed a bit at his mention of Rachel. She thought it wasn't wise to mention an ex in front of another girl on a date. John smiled at his mother's reaction. "Don't worry, where we're going she would never dare travel. So it’s something different entirely."

Anistasia smiled and laughed. "Well let’s see what looks good..." After some time looking over the food and sorting out some chips, fruit salad, left over mac n cheese, some sandwiches, and a large slice of cake she helped put the rest back in the fridge. "That looks like a good meal." She laughed and smiled. "That is probably smart of her. I still owe her for these claw marks on my cheek but now I'm a little excited. Are we going to a haunted house or something?" She laughed at her own stupid joke.

He chuckled "Well that's where we're going to start." He then finished packing up everything in a bag he found. "Ready?" He asked Anistasia. "Sounds adventurous, I'm ready when you are." She smiled and looked back at his mother. "It was a pleasure to meet you."

"You too dear." His mom bid them farewell and once again John opened and closed the door for Anistasia. When they were all set in the car he drove off away from the town and into the outskirts towards some mountains in the distance.

Anistasia stared out the car window as the houses got further apart and the trees and open fields took up the landscape. "It is so gorgeous out here." She spoke in awe of the scenery she was taking in.
He glanced over to her and smiled at her pleasure, "I always thought so." he said. Not too long later he pulled into a dirt driveway hidden by trees, down the road it lead to a house in the middle of a clearing. The house was decent sized and starting to fall into disrepair. "There it is." He smiled looking over at her before noticing that a couple of black cars were parked in front of the house. His face turned grim "Hold on." He told Anastasia in a panic, his corvette's engine screaming, he pulled a 180 in the dirt and sped off back down the driveway and towards town, far faster than he had driven up. 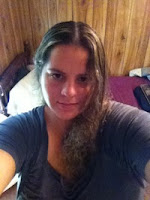 Toni Sinns was born and raised in Western North Carolina before moving to Central Florida in 2011. She is an upcoming author/writer with a mind in multiple genres of novels and books. She is currently working on multiple novels that you can read about on her website.


*Disclosure of Material Connection: I am a member of Reading Addiction Blog Tours and a copy of this book was provided to me by the author. Although payment may have been received by Reading Addiction Blog Tours, no payment was received by me in exchange for this review. There was no obligation to write a positive review. All opinions expressed are entirely my own and may not necessarily agree with those of the author, publisher, publicist, or readers of this review. This disclosure is in accordance with the Federal Trade Commision’s 16 CFR, Part 255, Guides Concerning Use of Endorsements and Testimonials in Advertising*
Posted by Cathy De Los Santos at 5:00 AM

Enjoyed hearing about your review and glad you could find some parts that you liked. Also thanks for taking the time to review it and being one of my stops on the blog tour :)

Thanks Valerie, I hope you pick yourself up a copy (or win one) and find it as interesting as it sounds :)

I live in Central Florida, would love to support a local author! :-)

Thanks for the great giveaway! Sounds like a really good book!

Thanks for the giveaway. :) I hadn't heard of this book before, but it definitely sounds interesting!

Jenese what part? We should get lunch sometime :)

I'm glad you all think the book sounds interesting. Hope you all pick up a copy yourselves. And if you do let me know what you think :) Would love to hear your thoughts.