From the Review Pile: 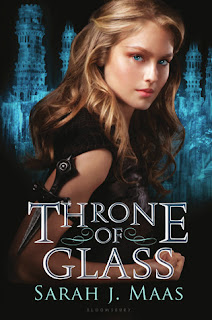 
Her opponents are men—thieves and assassins and warriors from across the empire, each sponsored by a member of the kings council. If she beats her opponents in a series of eliminations, she’ll serve the kingdom for three years and then be granted her freedom.

Celaena finds her training sessions with the captain of the guard, Westfall, challenging and exhilirating. But she’s bored stiff by court life. Things get a little more interesting when the prince starts to show interest in her... but it’s the gruff Captain Westfall who seems to understand her best.

Then one of the other contestants turns up dead... quickly followed by another. Can Celaena figure out who the killer is before she becomes a victim? As the young assassin investigates, her search leads her to discover a greater destiny than she could possibly have imagined

After a suicide attempt, and now her parents' separation, Rinn and her mom move from California to the rural Ohio town where her mother grew up. Back on her medications and hoping to stay well, Rinn settles into her new home, undaunted by the fact that the previous owner hanged herself in Rinn's bedroom. At school, her classmates believe the school pool is haunted by Annaliese, a girl who drowned there. But when a reckless séance goes awry, and terrible things start happening to her new friends—yet not to her—Rinn is determined to find out why she can’t be "touched" by Annaliese...or if Annaliese even exists.

Annaliese? Or herself?
Posted by Cathy De Los Santos at 3:11 PM

You absolutely must read Throne of Glass soon! Assassins, fighting, beautiful gowns! I'm not even done yet and I LOVE it. :)

Thanks for stopping by! :D

im interested.. makes me wanna do this meme too :)

Thanks for sharing! The Unquiet is now on my wishlist. I hadn't heard about this book until now and it sounds really good! :D

Both books are pretty interesting...can't wait to get my hands on them, even if it means breaking my buying ban.

I have both of these on my wishlist! I don't have actual copies, but they do sound good :)

Throne of Glass sounds so good- I love a good fantasy novel. I'm definitely intrigued!
Read it soon so I can read your review!
x

Throne of Glass is on my wishlist and I cannot wait to get it!

I dont really know about Throne of Glass. But I sure can't wait to hear your review once you've read it :)

I have both books in my TBR list. Hoping to get them soon.

The Unquiet sounds interesting, I might look out for that one. Thank you for visiting and commenting on my blog :)