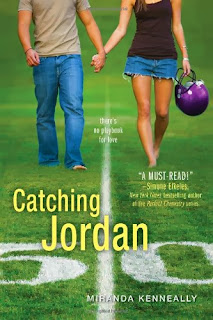 Description:
What girl doesn't want to be surrounded by gorgeous jocks day in and day out? Jordan Woods isn't just surrounded by hot guys, though - she leads them as the captain and quarterback on her high school football team. They all see her as one of the guys, and that's just fine. As long as she gets her athletic scholarship to a powerhouse university. But now there's a new guy in town who threatens her starring position on the team... and has her suddenly wishing to be seen as more than just a teammate.

Review:
Jordan Woods, the quarterback for her high school Tennessee football team, her head is constantly in the game.  Her only goal is to go to Alabama to play for their collage football team.  Then there's her best friend Sam Henry, he's with her the majority of the time.  He even sleeps in the same bed with her at least a couple times a week.  They are like two peas in a pod.  But then a new guy comes to town, who also happens to be a quarterback and who also happens to be the first guy to make Jordan feel like she wants to be more like a girl.  This turns her world upside down because with Ty's arrival she starts losing focus on her main goal - Alabama State - and herself.

There was something about Ty that I thought was off, but you can form your own opinion of course. Sam used to go out with Carrie but every since they broke up Jordan thought he has been so sad.  One day Carrie tells Jordan why they broke up, turns out Sam is in love with someone else and it takes Jordan a few minutes to figure out its her.  If she thought Ty's arrival was a whirlwind, well she wasn't ready to find out her best friend was in love with her and that she might be into him as well.  That's when all the drama starts, there are fistfights, missing practices, a lot of crying and heartbreaking and even a sprained knee.  I won't go into details because I really think you should check this book out.  I loved it and could have read it in a day.  Can't wait to see what Kenneally comes up with next.
Posted by Unknown at 8:57 AM

I loved this book! I got the same feeling you got about Troy. Glad you enjoyed it. Great review!

Glad you liked this one, I too can't wait for Keannelly's next book:D