Review: Breaking the Rules of Revenge by Samantha Bohrman 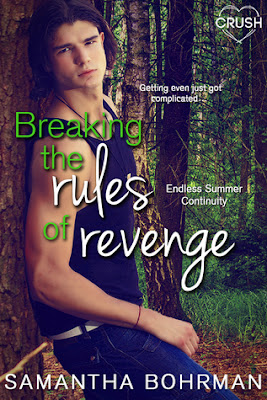 Description:
Mallory Jones is tired of being the girl who stays home and practices French horn while her identical twin, Blake, is crowned homecoming queen. So when she has the opportunity to pretend to be Blake, she takes it. At Camp Pine Ridge, she will spread her wings and emerge a butterfly. Or at least someone who finally gets kissed by a cute guy. That is, until bad boy Ben Iron Cloud shows up, ready to get revenge on Blake—aka Mallory.

If it weren’t for that infuriating girl, Ben wouldn’t even be at camp. Luckily, he now has six weeks to soak up some rays and get even with his nemesis. But the more time he spends with Blake, the more he realizes she’s nothing like the girl he thought she was—she’s kind and innocent and suddenly way too tempting. And soon enough, revenge is the last thing on his mind. Unfortunately, the girl he’s falling for is keeping a major secret…

Disclaimer: This book contains a super-hot bad boy out for revenge, all sorts of camp hijinks, and a girl who realized she’s been a butterfly all along.

Now that summer is coming to an end so is the lovely world of sleep away camps, and we all know what happens at camps (or at least we can imagine) a whole lot of shenanigans.  This book did not disappoint in the whole camp pranks that’s for sure.  Samantha Bohrman did a great job bringing this camping experience to life.  We met some interesting characters and had a laugh or two.

We meet Mallory, who is Blake’s identical sister (but she’s also the one no one notices), she decides to take over Blake’s life for her at camp.  Yes they are pulling the old switch-a-roo almost parent trap like but not, man I really loved that movie.  Anyway so Mallory wants to come out and be a different person, someone people will notice and will interact with her more, little did she know that Blake’s nemesis will also be at the same camp, Ben.

I really liked the fact that Ben was a Native American, as you don’t often see that in young adult novels (not included you know what Team Jacob lol).  But it was sad to see that he really didn’t know much about his heritage to begin with, regardless he was an interesting character.  Especially when he thought he was dealing with the real Blake and was fooled the whole time.  Oh the regret of those silly, silly pranks.  Although they were quite funny and unique.

Anyway the dynamic between Mallory and Ben is adorable.  They get each other and complement each other very well, but again there are secrets that are being held and won’t be revealed until the end, with that as I’m sure you can imagine will be consequences.  Things happen between the two of them, truths come out and realities are finally in play.  It’s what you do with the information you are given that make you the better person and I think the two of them figured out exactly what they needed to do with each other.

Overall I thought the book was a quick and easy fun read.  Perfect for the end of summer, with a few funny hi-jinks, some very interesting secondary characters and typical people you would expect to see at camp.  The setting was great, the people were great, just an overall good book.  I really liked the cover too, it was very eye catching.

I received this book from NetGalley and Entangled Publishing, LLC, so that I may give my honest opinion and a review. Whether it is good or not please do not let it discourage you from purchasing/reading the book yourself and forming your own opinion. What might be good for me may not be good for you and vice versa. With that said, Happy Reading Everyone!!!