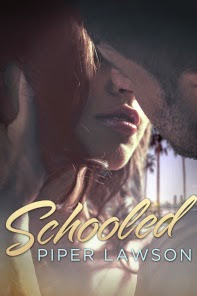 Description:
Twenty-one-year-old Alexis Caine is so close to her dream she can taste it. And it tastes like validation and Häagen-Dazs.

In a few months the quick-talking redhead will graduate with a shiny new business degree and launch a fashion label with her best friend Ava. All the planning, dedication, and saying ‘no’ to everything - and everyone - distracting will pay off.

Then Dylan Cameron, Ava’s tall, dark and broody younger brother, returns from the East Coast to start sophomore year at Lex's San Diego college. Lex has hardly seen him in years and given his reputation for partying and girls, that’s just fine with her.

But Dylan’s all grown up. And a night of unplanned confessions for both of them threatens to tear Lex’s carefully constructed world off its axis…

Because one sassy control freak + one prodigal son = chemistry that refuses to be ignored.

Sometimes in life you have to stop being so one track minded and realize there are other things out there in life and maybe, just maybe, you should be enjoying them as well.  That is what Piper Lawson brings out in her debut novel Schooled.  She of course brings this with some very steamy scenes and some great characters.

We meet Alexis who is determined to start her business upon graduation of college, and when I say determined I mean she doesn’t want to focus on anything but that, but then comes in her best friends little brother.  He’s not so little anymore and there is a fascination about him.  Heck even I’m fascinated by him and even though I don’t fully believe he isn’t that experienced I guess it could happen.  One thing leads to another and they kiss upon their reunion and this leads to many more explorations.  I get the whole older woman and younger man, but they really do not have that much of an age difference and there were times when I felt that Dylan was more mature than Alexis.

They definitely go through some ups and downs and keepings things on the hush are never a good thing especially when it’s your best friend’s brother.  But sometimes you have to when you are trying to maintain the peace and keep your promise about no boys.  It’s a critical time for Alexis and Ava who are about to graduate and are working on creating their own fashion label, again with the focus.  But Dylan definitely makes Alexis lose focus more than once.  Their relationship is sweet, very steamy and becomes very real to the both of them.  Although I did get a puppy dog feeling from Dylan maybe that just showed his immaturity to the situation.

Overall this was a good book, it took me a minute to get into it again not believing such a hot guy could be as inexperienced as he said he was, semi thought he was lying about that, but regardless.  Once I got into the book I knew I had to finish it because things just got more interesting, so a great quick read that will definitely has the characters growing on you.  Maybe the next book in this series will focus a little more on Ava as she wasn’t a real focal point just kind of there, but I found her fashion mind appealing. Great start to a series. Go check the book out, you won’t be disappointed.

The cover is definitely cute, and it makes you wonder exactly who is getting schooled, is it Dylan the younger guy who is inexperienced or the older woman who needs to learn to let loose and not be so one track mind all the time.  Great read.

About the Author
Schooled is Piper Lawson’s debut novel. Piper loves reading and writing stories about sassy, sexy, smart women and the guys who fall hard for them.
Piper’s main household expenditures include books, shoes, and chocolate, not necessarily in that order. Coffee = life (and she’ll defend it accordingly, especially when cornered). Piper has two business degrees, neither of which she’s leveraged into a fashion label.
Home is Canada plus occasional sunny winter escapes.
Website| Twitter