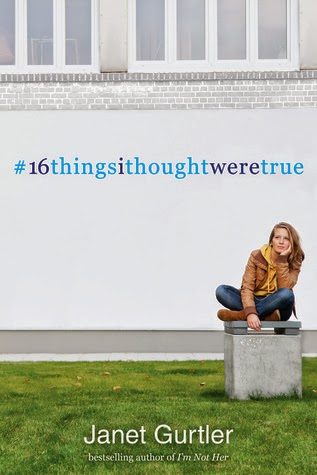 Description:
Heart attacks happen to other people #thingsIthoughtweretrue
When Morgan's mom gets sick, it's hard not to panic. Without her mother, she would have no one—until she finds out the dad who walked out on her as a baby isn't as far away as she thought...
Adam is a stuck-up, uptight jerk #thingsIthoughtweretrue
Now that they have a summer job together, Morgan's getting to know the real Adam, and he's actually pretty sweet...in a nerdy-hot kind of way. He even offers to go with her to find her dad. Road trip, anyone?
5000 Twitter followers are all the friends I need #thingsIthoughtweretrue
With Adam in the back seat, a hyper chatterbox named Amy behind the wheel, and plenty of Cheetos to fuel their trip, Morgan feels ready for anything. She's not expecting a flat tire, a missed ferry, a fake girlfriend...and that these two people she barely knew before the summer started will become the people she can't imagine living without.

Ah the world of Twitter, sometimes it’s easier to make friends on there than it is to have friends in real life because you don’t really have to deal with reality, you can be whoever you want to be.  I think Janet Gurtler did a great job of showing how much the main character really does need to get a grip on her reality and life her life to the fullest.  After all life is short.

We meet Morgan who after a very embarrassing video of her dancing was posted all over the place has the only main goal of reaching 5000 followers on Twitter, but that’s now what life is all about and she learns this quickly when so many things happen to her in a rather short period.  While working during the summer at a local theme park she befriends two people that she wouldn’t have otherwise thought to befriend, Adam the manager and Amy a fellow clerk in the park.  But it’s these friendship that she forms that help her get through the next couple episodes in her life.

First we have a unique mother who neglects to tell Morgan who her real father is until she believes she’s about to die, which she doesn’t, but now Morgan is on a mission to find her real father.  There are certain things she believes, and when she comes face to face with him those realities are shattered and new ones are formed.  It was all very fascinating watching their reunion happen the way it did.  Again she couldn’t have gotten through any of that without the help of her true friends, her real friends, not her twitter friends.

There were some really great moments in the book that pulled at your heart strings and made you think about what you are doing with your life and hoping that you remember to live it to the fullest.  Don’t leave important things for tomorrow because it may never come.  I loved the character of Amy, she bought life to the book with her optimistic outlook on life and her very much direct way of talking but in a good way, sometimes it’s ok to not have a filter.  Without a filter that’s how you learn the truth about things and people around you.

Overall I liked this book, it kept me entertained from beginning to end and would recommend this book or anything by this author to everyone.  I think the cover is cute, and appropriate for this book.  I hope you all remember to live in reality and not virtual reality.
Posted by Cathy De Los Santos at 10:42 AM