Review: The One by Kiera Cass 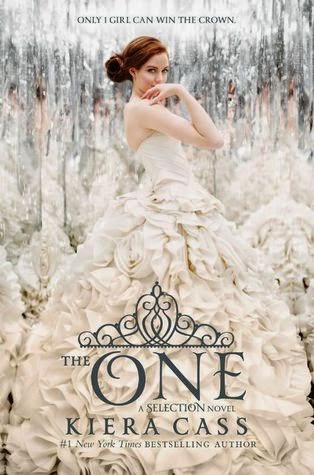 Description:
The highly anticipated conclusion to Kiera Cass's #1 New York Times bestselling Selection series, The One will captivate readers who love dystopian YA fiction and fairy tales. The One is the perfect finale for fans who have followed America's whirlwind romance since it began--and a swoon-worthy read for teens who have devoured Veronica Roth's Divergent, Ally Condie's Matched, or Lauren Oliver's Delirium.

The Selection changed America Singer's life in ways she never could have imagined. Since she entered the competition to become the next princess of Illéa, America has struggled with her feelings for her first love, Aspen--and her growing attraction to Prince Maxon. Now she's made her choice . . . and she's prepared to fight for the future she wants.

Find out who America will choose in The One, the enchanting, beautifully romantic third book in the Selection series!

I have loved this series from the very beginning, the covers are amazingly beautiful and you just want to cheer for America all the way through.  Kiera Cass has created a world of competition on a new level, because really who wouldn't want to compete to be the next princess perhaps one day queen of anywhere.  With dreamlike fantasy gowns and rebels ready to take over or help, it all depends on what side you're on.

We are back with America and the other three final girls, it's always hard to make a decision but I feel as if Maxon has one, he's just not 100 percent sure.  America and Maxon get a lot closer in this book during the beginning, they learn more about the rebels and what they are fighting or not fighting for.  It's all about equality and everyone should have that luxury.  Through it all America stands tall and deep within her she fights against the king and his demanding ways, she fights for the lower castes and the public sees that and they adore her more with each action she stands up against.

There was a lot of drama in this book but there were also a lot of feelings being thrown around.  The final four have finally learned to get along when true feelings come out.  Characters you thought you didn't like you just seemed to enjoy them more.  Then there is the obviousness of America and Maxon struggling with admitting their feelings for one another.  Just say it already, life is too short, that's my motto.  Regardless the story was great, although it felt rushed at some points it was still a good story that bought about many different emotions as all books should do.  I laughed, I cried, my heart tugged just a bit, all great things the author bought out in me.

Overall this was a good ending to the book, the cover is amazing.  What a wonderful dress that anyone would be lucky to have.  The ending was pure sweetness as everything seemed to work out the way it was supposed to work out.  Tear :-) I will say this book seemed to move a little around the place but I see they were trying to get everything resolved and that they did.  Definitely did shock me how they did it and would have loved more detail but when it's only one POV it's kind of hard to do, either way, great ending to a great series.  These characters will be missed, but I believe great things are just beginning with them.