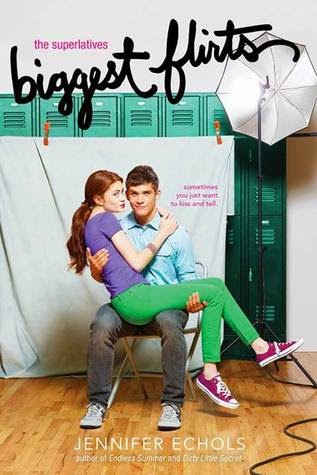 Description:
Tia and Will’s lives get flipped upside down when they’re voted Yearbook’s Biggest Flirts in this sassy novel from the author of Endless Summer and The One That I Want.

Tia just wants to have fun. She’s worked hard to earn her reputation as the life of the party, and she’s ready for a carefree senior year of hanging out with friends and hooking up with cute boys. And her first order of business? New guy Will. She can’t get enough of his Midwestern accent and laidback swagger.

As the sparks start to fly, Will wants to get serious. Tia’s seen how caring too much has left her sisters heartbroken, and she isn’t interested in commitment. But pushing Will away drives him into the arms of another girl. Tia tells herself it’s no big deal…until the yearbook elections are announced. Getting voted Biggest Flirts with Will is, well, awkward. They may just be friends, but their chemistry is beginning to jeopardize Will’s new relationship—and causing Tia to reconsider her true feelings. What started as a lighthearted fling is about to get very complicated…

Review:
She's back!!! The Jennifer Echols I adored when I read her very first book and couldn't stop boasting about her so much to anyone who would listen is back!  I'm so happy I had the pleasure of reading this book because it just made me so happy to see some really great characters and a fun story.

We meet Tia who is someone with some major commitment issues, and some definite responsibility issues, as in she doesn't want any at all.  She's carefree and ready for whatever, as long as there is nothing for her to lose, that is until she meets Will.  Will is a recent addition to their little town as he just moved from Minnesota and runs into Tia at a party.  One thing leads to another and they very much form a connection.  Stronger than either one was ready for.

There are some avoidance antics in this book and some really great friends.  A lot of denial is what keeps Tia going, because even though she has feelings for Will she just can't commit to him, which brings on some more back and forth from the both of them.  There is some definite tension and when they were both elected biggest flirts it just seemed to emphasize this attraction more.  They have some great friends who try to reason with both of them but even that doesn't work, it takes a lot of hit and misses with the two of these characters but they find their way eventually.

Overall this was a quick easy read, really great for the summer.  I'm just so happy that Jennifer Echols is back on her game.  I really liked this story and eve though I'm not too fond of the cover, because that's not what I think the characters look like, I still think its a cute cover, definitely an eye catcher.  I know I read some of the reviews and it was hit or miss but I have to tell you if you liked Jennifer's earlier books you will definitely like this one, I know I did.
Posted by Cathy De Los Santos at 7:19 PM