Review: The Guard by Kiera Cass 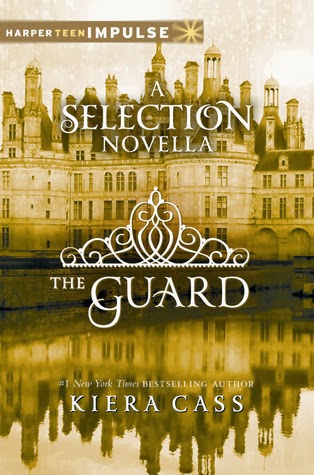 Description:
Before America Singer met Prince Maxon . . .
Before she entered the Selection . . .
She was in love with a boy named Aspen Leger.

Don't miss this digital original novella set in the captivating world of Kiera Cass's #1 New York Times bestselling Selection trilogy. This brand new 64-page story begins just after the group of Selected girls is narrowed down to the Elite and is told from Aspen's point of view. The Guard also features a teaser to The One, the thrilling conclusion to The Selection trilogy.


This was a short and sweet novella into the mind of Officer Aspen Leger.  True there were no special events that happened that we didn’t really see from the original series but it’s nice to get a side prospective from someone else.  You can obviously tell how much he still loves America and hopes that one day he will be able to finally marry her.  But if you’re following the Selection closely I don’t see that happening, sure we could all wish for a happy ending on his part but really it’s all about America at the moment.
We see him go through his guard duties and even try and gather intel from her maids, but still always in the back of his mind how much him and America belong together.  It’s overall sweet.  He truly does care for her and I think he might be hurt in the end.  It's a genuine thing where he wants to work so that he can make a good life for the both of them and she doesn't even really realize it.  I kinda felt for him a little more because don't get me wrong I still really like Maxon but it seems that Aspen does have something going for him, real love.

Overall this was a cute quick read that gave you some insight into Aspen but there was nothing new in it in terms of action that happened throughout the book.  Would have liked to have been introduced to a new scene that happened in between or something that was a little more significant.  Can't wait for the next book in the series though that's for sure.  This totally needs to be a TV show, I'm patiently waiting.