Review: The Rules for Disappearing 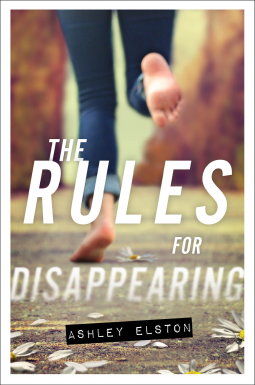 The Rules for Disappearing
By: Ashley Elston
Release Date: May 14, 2013

Description:
She’s been six different people in six different places: Madeline in Ohio, Isabelle in Missouri, Olivia in Kentucky . . . But now that she’s been transplanted to rural Louisiana, she has decided that this fake identity will be her last.

Witness Protection has taken nearly everything from her. But for now, they’ve given her a new name, Megan Rose Jones, and a horrible hair color. For the past eight months, Meg has begged her father to answer one question: What on earth did he do—or see—that landed them in this god-awful mess? Meg has just about had it with all of the Suits’ rules—and her dad’s silence. If he won’t help, it’s time she got some answers for herself.

But Meg isn’t counting on Ethan Landry, an adorable Louisiana farm boy who’s too smart for his own good. He knows Meg is hiding something big. And it just might get both of them killed. As they embark on a perilous journey to free her family once and for all, Meg discovers that there’s only one rule that really matters—survival.

Imagine having to change your name every couple months, moving around to different places pretending you are someone you're not and the whole time wondering when will be the next time you leave to a new identity.  This is what Meg and her family goes through as they are now part of the Witness Protection Program.  Even though throughout the majority of the book we don't really know why, her father knows but he just doesn't want to give up that information, which only makes Meg more curious.  She doesn't want to put roots down anywhere because she doesn't know when she will be leaving again, so making friends, having a boyfriend or anything serious including sports is just out of the question for her, which makes her life quite lonely.  If it wasn't for Teeny her sister she doesn't know what she would do with herself, but she has to be strong for her sister.


They end up at a new location and I can just imagine it clearly in Louisiana, with all the Cajun accents flying around and that southern drawl, I've always wanted to go there and I know the setting is very simplistic since it's rural but even still I can imagine it and that's what transports me to that location, the author's description.  From farming, to hog hunting and just the description of the Louisiana accent draws me in completely. It’s all very Dreamy.  Anyhow back to the story, she meets a boy and he can't help but pursue her, there is something about her that he's attracted to and he knows that she has secrets but that does not deter him from trying, even going through her little sister to get more information on her.  Eventually she starts to give in and starts to feel a semblance of a real life again, some normalcy.  Her and Nathan go out a couple times but still there is this nagging feeling of a memory she should have and why they are in the witness protection program.


Even though she feels as if it's her dads fault that they are in this predicament slowly memories and truths start coming out and a new light is shed on Meg.  What really happened and what she needs to do to get her family out of the situation they are in, but is it worth it.  What is she risking by doing this?  Who does she trust?  This seems to be a really big theme lately in the books I've been reading.  But it's hard trusting people and thinking you are doing the right thing and it may not be.  There is not a lot of love in this book, but sometimes its okay, because there was still a love interest it just wasn't the main topic in this book.  Sometimes it's good to get away from that for a book or two.  The main story was about Meg and her trying to figure out what is going on and getting her and her family's life back the way it was before, even though now she wants to stay in Louisiana.  She just wants to be free and not have to be scared anymore.


The overall book was exciting and interesting and you felt the fear of the main character when she got into some paranoid situations.  You’ll have to read the book to find out what happens though, and it’s definitely worth the read.  I really like the cover too because it’s just simple and the blurriness can just show you how fast things can happen when you least expected, and I have to say everything did sort of happen unexpectedly.  My favorite thing is when each chapter would start the book such as below:


RULES FOR DISAPPEARING BY WITNESS PROTECTION PRISONER
#18A7R04M
Never tell anyone your secrets.  They’re called secrets for a reason.

Disclaimer:
I received this book from NetGalley and Disney Book Group, so that I may give my honest opinion and a review. Whether it is good or not please do not let it discourage you from purchasing/reading the book yourself and forming your own opinion. What might be good for me may not be good for you and vice versa. With that said, Happy Reading Everyone!!!
Posted by Cathy De Los Santos at 11:58 AM