Blog Tour: The Only Exception Review/Excerpt/Giveaway 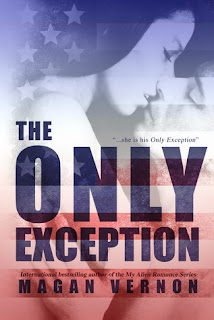 The Only Exception
By: Magan Vernon
Release Date: April 9, 2013

Description:
**Due to sexual content and heavy subject matter, this book is recommended for ages 16+**

Fiercely liberal Monica Remy prefers to blend in. Despite her tattoos, piercings, and outspoken personality, she transferred to Central to escape—before she finds out that her next door neighbor is the uber conservative governor's son, Trey Chapman.

No matter how hard she tries to avoid Trey, he still finds a way to get under her skin. Monica can’t stand his crisp white shirts or his staunch views on women. But she can’t help counting every freckle on his face and wondering what it would feel like to have him stop talking politics and kiss her.

A class debate project forces the unlikely pair to work together, and the political lines are blurred in late-night make out sessions. But despite their fiery chemistry, Trey’s politics threatens to smother their relationship for good.

I love it when characters have so much chemistry but they are complete opposites of each other and love to have a good debate.  That's what kept me excited throughout the whole book.  It's like she wants to resist him but she just can't because she just can't!  This book focused on politics and real life situations that happen in college, overall it was an interesting book and enlightening.

We meet Monica who has just transferred to a new college because she's running away from a situation that happened at her old one, when she runs into Trey the Republican Governor's son.  She's very much a liberal and doesn't believe in the governor's choices, she really dislikes him.  Well their first meeting was great and there was just something about her that Trey could not resist.  The first part of the book is him pursuing her very hard and her trying to resist him,, even though she secretly wants him as much as he wants her.

Throughout the book they talk about real life situations, especially when people pressure you to do things you don't want.  Their debate is heated throughout the book and very intense.  She finally breaks down and decides to go out with him and one thing leads to another and the attraction is just undeniable between the two.  They definitely have some chemistry and that's always a fun thing to read between two people.

I generally don't have a political interest in anything political but even this book with the ongoing debates and talk about politics got me interested.  Not to mention that I can completely picture Trey with his button down shirts looking great and the eyebrow wearing liberal Monica.  Not to mention the Dread locked pot smoking roommate.  The descriptions of the characters in this book and the scenery with the colleges and the houses, it was very well done and I could picture everything and everyone quite perfectly.  Even the Blond Barbie sorority sisters.

This book could definitely be made into a Lifetime movie that's for sure, and they have such political names on top of that.  But let me tel you the steamy scenes were definitely quite steamy and written very well too.  Never though to have classical music while taking a bubble bath, wink.  Really great book and I can't wait to read more from this author.  The characters were likable and the story was great.  I know I didn't touch too much on the main topic of not only the debate but what they were debating about, sex and contraception.  You should really check the book out because it's worth the read.

Oh and don't forget to check out that excerpt it's part of one of my favorite parts of the book!


I bit down on my bottom lip. Did the governor not like me? Was this about to be a huge blow to my ego? "And what did you tell him?"


He took a step closer, pressing his forehead to mine and wrapping his arms around my waist. I inhaled Trey's wonderful fragrance; freshly laundered shirts and expensive cologne. "I told him that the moment I met you, I knew there was no one else I'd rather be with. That you’re the girl who challenges me more than anyone and makes me want to be a better person."


"You actually said that to your dad?" I had to keep my jaw from dropping to the ground.


He nodded slightly and brushed a stray strand of hair out of my face. His touch made my lip tremble. It was as if his fingers had a direct line to my libido, and the more he touched me the more I didn't want him to stop. "I'd never been so angry that I would actually punch a guy, until last night. It showed me that I could actually have pure, unadulterated passion in my life and not just believe in something because it's one of the principles I've been raised on."


"I love it when you give me your pseudo-political speeches, because they are more real than any other bullshit you would otherwise spiel," I said, wrapping my arms around his neck and pulling his body flush with mine.


"I love you, Monica Remy. You’re the only girl I've ever fallen so hard for. I never thought I'd love a bleeding-heart liberal with facial piercings, but you are truly the only exception."


With that I did the only thing there was left to do and pulled him into a kiss. It had felt like forever since I had and his lips were warm against mine, his tongue gliding inside and instantly making my body aware of his. I raked my fingers through his hair, tugging it lightly. His kisses became more passionate, more eager, and full of desire. They were short and then fast, each move of his tongue made my body tremble. He reached his hands lower down my back until he cradled my butt in them.


I felt a low moan gather in my throat and travel out of my lips into his mouth as his hands caressed me, almost better than any massage I had ever had.


He broke the kiss slightly and his lips trailed down to my neck, nibbling at the delicate skin that met my shoulders. I gasped, his fingers working their way up and down my back. His bulge was now prominently pressed right against me. My whole body responded, and I shivered underneath his touch, rocking my hips against his. I wanted to rip his dress clothes off right there in the backyard.


A loud, throat-clearing sound came from behind Trey. I jumped back, letting go of him and smoothing out my hair. Trey quickly adjusted the front of his pants and turned toward the noise. A short, Latin man in a pair of overalls with a straw hat, holding a garden hoe stared at us.


"Señor, Chapman, sorry to interrupt. I just need to get to the begonias," he said with a heavy accent.


Trey looped his arm around my waist, ushering me away from the flowers behind us, keeping his head down. "Oh sure, go right ahead, Manuelo."


"Gracias, Señor. Have a beautiful day!"


Magan Vernon is a Young Adult and New Adult writer who lives with her family in the insurance capital of the world. She is in a very serious, fake relationship with Adam Lambert and constantly asks her husband to wear guyliner. He still refuses. She also believes her husband is secretly an alien,


disguised as a southern gentleman.

Thanks for posting the great review!