Review: Songs About a Girl by Chris Russell 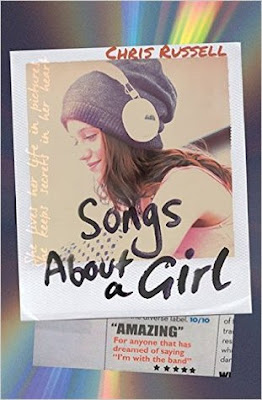 Description:
Charlie Bloom never wanted to be 'with the band'. She's happiest out of the spotlight, behind her camera, unseen and unnoticed. But when she's asked to take backstage photos for hot new boy band Fire&Lights, she can't pass up the chance.

Catapulted into a world of paparazzi and backstage bickering, Charlie soon becomes caught between gorgeous but damaged frontman, Gabriel West, and his boy-next-door bandmate Olly Samson. Then, as the boys' rivalry threatens to tear the band apart, Charlie stumbles upon a mind-blowing secret, hidden in the lyrics of their songs...

This was an interesting book to say the least.  I’ve always in my younger days dreamed of going to concerts and becoming friends with the talent, hanging out and doing all these great things.  But it’s not always as easy as it seems and Chris Russell did a great job of portraying that throughout this book.  Yeah it’s all fun and games but there is always a story behind anyone’s façade.

We meet Charlie Bloom, seems to be a quiet person with her best friend Melissa, they tend to keep to themselves most of the time.  But that doesn’t stop the mean girls from getting up in their face so there is quite a bit of bullying in this book which I wouldn’t mind teaching Aimee a lesson or two to bring her down a peg or twenty.  There is always that one person who thinks they are better than everyone else.  Those are the people that need to be humbled the most. This book is not mainly about bullying, there is also friendship, family, love, letting go, letting in and betrayal.  Betrayal happens to us all at one point it’s about how you deal with it that makes you the person you are.

Olly knows Charlie from school way back when and invites her on tour with his pop group to take photographs, one thing leads to another and Charlie forms friendships and more with some of the other members.  Its great watching the interaction between her and all the members, you really start to get to know them all and love them all the same.  Sure sometimes I wish she would end up with other people but I don’t know why it happens for some reason they always fall for the bad boy instead of the good guy.  Charlie is drawn to the fire and not the light.

Overall I thought this book was good and it kept me interested the whole way through, I thought the ending and close to the ending was the best parts.  The heightened drama and emotions I went through reading them were really great.  I was super shocked in some parts and sad in others, an epitome of an emotional rollercoaster.  But it was good and that’s what kept me going from beginning to end.  There are times when I wonder why not the good guy, but sometimes things have a way of sorting themselves out that you can’t help but say well now that explains a lot.  Great book.

I love the cover, so sweet innocent and simple, but still eye catching.  Great writing and overall just a great story.
Posted by Cathy De Los Santos at 1:34 PM