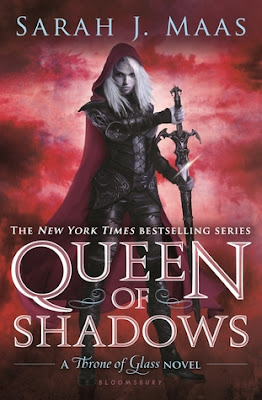 Description:
The queen has returned.

Everyone Celaena Sardothien loves has been taken from her. But she’s at last returned to the empire—for vengeance, to rescue her once-glorious kingdom, and to confront the shadows of her past…

She has embraced her identity as Aelin Galathynius, Queen of Terrasen. But before she can reclaim her throne, she must fight.

The fourth volume in the New York Times bestselling series continues Celaena’s epic journey and builds to a passionate, agonizing crescendo that might just shatter her world.

I have finally taken the chance to read this book and I couldn’t put it down.  Sarah J. Maas is just an amazing writer with quite a creative and imaginative mind.  Usually books in series start to go downhill but not this series, Throne of Glass has been amazing from the beginning through the whole series.  In this last book that I’ve read (will be reading the next one very soon) there was no disappointment and so much hope has been bought out on me with all these amazing characters.

We are back in Rithfold and Aelin is in the process of freeing magic and bringing down the King, rightfully so because he’s so very evil.  I want to tell you so much about the book but I really can’t without giving so much away.  Let’s just say this book was amazing.  The characters are amazing.  Aelin is stronger and more courage than any other character I’ve ever met.  Rowan is just as adorable as ever and her cousin Aedon is quite the macho man trying to be the tough one for her, but his rescue was mesmerizing and so fun to read about.  If this book (which I think it will) more like if this series comes to life on television I really hope they do everything the right way.

There are new and more dangerous evils in this world that are being created and bought back from long ago and that just means more work for these courageous characters.  Watching Dorian struggle with the valg that lied within him and has overtaken his body was so interesting.  Watching and reading about their fight for the castle and the fight against the king was intense and mesmerizing.  There was so much action in this book from all parts of the world that it kept you entertained from the very beginning to the very last page, and still I want more.

Ah I don’t really know how to review these amazing books because I just can’t give anything away because I really want you to read it all.

There was a lot of emotion in this book. In the beginning I didn’t think much for example of Manon, but by the end of this book I have to say even though she is a witch and on the slightly evil side, I’ve come to love her as a character.  She’s really grown on me and the things she has done and the things I know she will do in the future make her that much more of a likeable character and her human side has come out quite nicely.  There are so many people involved in this series.  You have Chaol who I was totally rooting to be with Aelin but after Rowan and meeting Nesryn I knew they weren’t meant to be.  All these new characters just bring more to the series and more excitement, relationships and more emotional involvement.  I can’t wait to see what happens next.

We were left with a little peace of mind but really how long will this peace last.  Not very long if the other players left in this story have any say on it.  I can’t wait for Aelin to rebuild Terrasen and to see what Dorian will do with the kingdom.  I have to say one of my favorite characters with her special abilities that I’m adoring right now is Lysandra, who would have though.  Quite lovely this gift of hers and unique to everyone there.  I have a feeling and an inkling about her possibly ending up with another character in the book, but I’ll have to wait to read the next one, after all I can hope.

Overall even this book was about six hundred something pages, it flowed nicely and you couldn’t help but continue reading.  Trying to finish it all as soon as possible so that you can know what’s going to happen next.  It’s hard not to want to know what happens next, I hope this series never ends.  The possibilities are endless.  The characters are amazing.  The story is amazing, original and interesting.  Sarah J. Maas I don’t know how you do it, and I can’t image doing it but keep on doing it because I will be a loyal fan till the end!  Now go read this as I try and finish catching up to this series.

Excerpt because this was so touching and things they are a changing!:

“What was it like?” Manon asked quietly. “To love.”
For love was what it had been—what Asterin perhaps alone of all the Ironteeth witches had felt, had learned.
“It was like dying a little every day. It was like being alive, too. It was joy so complete it was pain. It destroyed me and unmade me and forged me. I hated it, because I knew I couldn’t escape it, and knew it would forever change me. And that witchling … I loved her, too. I loved her in a way I cannot describe—other than to tell you that it was the most powerful thing I’ve ever felt, greater than rage, than lust, than magic.” A soft smile. “I’m surprised you’re not giving me the‘Obedience. Discipline. Brutality’ speech.”
Made into monsters.
“Things are changing,” Manon said.