Blog Tour: Pieces of You and Me by Erin Fletcher 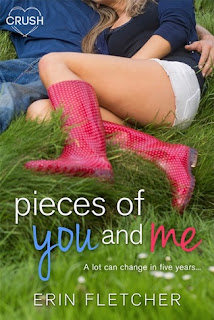 
Disclaimer: This Entangled Teen Crush book contains references to drinking, addiction, and just the right amount of angst. You’ll want to save this tortured hero, while at the same time, not want to change a single thing about him!
Five years.
That’s how long I’ve been gone. Since I left my best friend—the girl I loved—behind.
Five seconds.
That was how long it takes to realize I am completely, utterly, screwed. Because now that I’m back, my childhood crush has turned into so much more.
Rylee has changed. We both have. And now I’m drawn to her in a completely different way. To her smile. Her touch. To reliving old memories and making new ones. To the happiness she’s always given me that I haven’t felt since I left.
But her friends are hell-bent on keeping us apart. My dad is one drink away from destroying both of our lives, and maybe I am, too. It’s only a matter of time before I have to leave again, and there’s nothing I can do to stop it. I never get a choice.
The one choice I can make? Stay away from Rylee. Because if I don’t, I’ll break her heart—and mine—all over again.

Oh to be a teenager in high school and have to deal with drama, no thanks.  But then again when there is that one person that was always by your side, and they come back into your life things just start to feel so right.  But that doesn’t matter because again this is high school and sometimes you just can’t control everything.

We meet both Rylee and Chase in their junior year of highs cool.  They were once best friends and inseparable when they were in middle school but then Chase moved away and Rylee never heard from him again, until he turns up back at school and back with his dad.  It’s cute seeing their reunion happen and their realization that hey they aren’t little kids any more this isn’t just an innocent friendship, this is more and it’s probably always been more they were just too young to see it.  But there are of course complications throughout the book.

It was interesting seeing their relationship from old to new and to secret of course because neither of them wanted anyone in their business.  But of course there will be nosy overprotective friends, and their boyfriends.  The dynamic between Rylee and her friend Mya was a little much, I think Mya was way too overprotective, there is friendship and then there is beyond friendship protectiveness. I got kind of turned off a little but I know it was just her way of being a good friend to Rylee.  Other than that I really enjoyed the book.

This book not only touched upon a relationship that was long in the making, but it also touched upon alcohol abuse.  It’s something that happens quite often and people don’t even realize it.  So I thought that was a really great message throughout the book, the idea of getting help is a major step in getting past this sickness.  I think Chase was a great character and had real substance.

Overall I thought the book was a quick and easy read that had me interested from beginning to end.  I wouldn’t have minded seeing some of Chase’s drawings but I can only imagine what they looked like and how adorable to have a book that they passed back and forth between one another since middle school.  Would love to have memories like that.  Great book!

Erin is a young adult author from North Carolina. She is a morning person who does most of her writing before sunrise, while drinking excessive quantities of coffee. She believes flip-flops qualify as year-round footwear, and would spend every day at the beach if she could. She has a bachelor's degree in mathematics, which is almost never useful when writing books.

April 20th
Curling Up With A Good Book, curling-up-with-a-good-book.blogspot.com,