Review: Beauty and the Mustache by Penny Reid 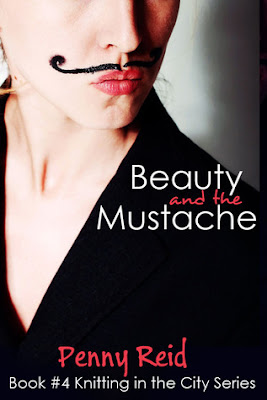 Beauty and the Mustache
By: Penny Reid
Release Date: August 28, 2014
Series: Knitting in the City #4

Description:
There are three things you need to know about Ashley Winston: 1) She has six brothers and they all have beards, 2) She is a reader, and 3) She knows how to knit.
Former beauty queen, Ashley Winston’s preferred coping strategy is escapism. She escaped her Tennessee small town, loathsome father, and six brothers eight years ago. Now she escapes life daily via her Amazon kindle one-click addiction. However, when a family tragedy forces her to return home, Ashley can’t escape the notice of Drew Runous— local Game Warden, reclusive mountain man, bear wrestler, philosopher, and everyone’s favorite guy. Drew’s irksome philosophizing in particular makes Ashley want to run for the skyscrapers, especially since he can’t seem to keep his exasperating opinions— or his soulful poetry, steadfast support, and delightful hands— to himself. Pretty soon the girl who wanted nothing more than the escape of the big city finds she’s lost her heart in small town Tennessee.
This is a full-length novel, can be read as a standalone, and is the fourth book in the 'Knitting in the City' series.

Imagine a world full of beards, that’s what I see when I picture Ashley and all of her brothers, very hot brothers at that.  Penny Reid is a fantastic writer and her series of the Knitting Club just gets more and more interesting each time I read them.  I love that we get a glimpse of all the previous characters and that these women have formed such a strong bond with one another that they are for all intents and purposes one big happy family that just keeps growing from book to book.

This book focused on Ashley, and she may think she is not worth anything really, but to me and everyone around her she is a fantastic person with a great overall ethic.  It’s a really sad reason as to why she has to go home and I will not lie, I had tears in my eyes at some points throughout the book.  But it’s a good thing that she did go home because after being away for so long so much has changed.  She needed to get back in touch with her roots, and many beards.

Home is where we meet the blond bearded Drew, whose energy she just gravitates to.  It was touch and go between the two of them for a while, but I think after finishing the book that he did these things on purpose and for a reason.  But when the two of them smiled at one another, and he wrote poetry about her, it was magical.  I love the chemistry between characters that Penny Reid seems to create.  It’s not lustful at first sight, no there is a growth there and companionship, but let’s not forget the laughs from Sandra either.

Drew helped Ashley through a really tough time, the introductions of her brothers were a fabulous addition to this ever growing family and I can’t wait to read more about each of them because they all have such special personalities.  Overall this was another great addition to the series and I can’t wait for more.  And oh how I dreamed of so many beards everywhere, he he.
Posted by Cathy De Los Santos at 10:56 AM