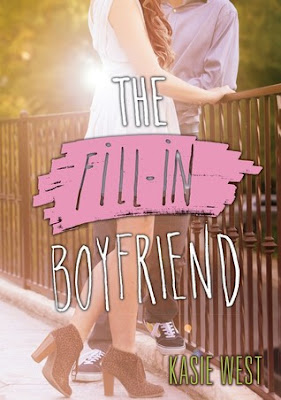 Description:
When Gia Montgomery's boyfriend, Bradley, dumps her in the parking lot of her high school prom, she has to think fast. After all, she'd been telling her friends about him for months now. This was supposed to be the night she proved he existed. So when she sees a cute guy waiting to pick up his sister, she enlists his help. The task is simple: be her fill-in boyfriend—two hours, zero commitment, a few white lies. After that, she can win back the real Bradley.
The problem is that days after prom, it's not the real Bradley she's thinking about, but the stand-in. The one whose name she doesn't even know. But tracking him down doesn't mean they're done faking a relationship. Gia owes him a favor and his sister intends to see that he collects: his ex-girlfriend's graduation party—three hours, zero commitment, a few white lies.
Just when Gia begins to wonder if she could turn her fake boyfriend into a real one, Bradley comes waltzing back into her life, exposing her lie, and threatening to destroy her friendships and her new-found relationship.

I’ve only read one other book by Kasie West and I fell in love with that one as well, she is a really wonderful writer that hooks you from beginning to end with her stories.  The characters are real and genuine, learning and growing from the first page until the very last page.  This book did not disappoint in the least and I think it’s a perfect quick fun, entertaining read that will keep you with the main character through all her scheming and realizations.  There is a lot of anticipation, and I love that because that is what makes you want something even more.

We meet Gia, who is your everyday normal girl, very popular, her family is very normal with no issues and no fighting at all.  It’s like watching a stepford family, but she’s happy with it.  That is until a series of events opens her eyes to the world around her, maybe she wasn’t doing things the right way.  Sure she was popular but was has she accomplished other than being remembered, but who will she remember.  That’s her dilemma for most of the book but man was it entertaining getting there.  She meets fill-in Bradley at the beginning of the book and even I’m intrigued by him.

Sure there are subsequent issues that will always arise when there is a fake fill in boyfriend but even though we know it will turn out to be a disaster we just keep watching because we know how things are going to go and watching Gia with fill-in Bradley aka Hayden (great name) just made us love them more.  Sometimes theater geeks as he is described in this book can give you more than you can imagine instead of an older college guy who is all beefy, really it’s the quality that matters not the quantity.

Overall this book was amazing, you have to go buy it!!! It will be a great read to have by the pool during the summer or just a fun quick read at home.  It really had a lot of great elements, sweet moments, and honest feelings being put out there. I always love it when pretending turns into something real.  This book did not disappoint.

I just have to mention the cover, because it’s absolutely adorable, and I would definitely pick this up to find out more about it because the cover appeals to me.  Her shoes are really cute too! Go get this book, you know you want to!!!!