Review: In her Wake by K.A. Tucker 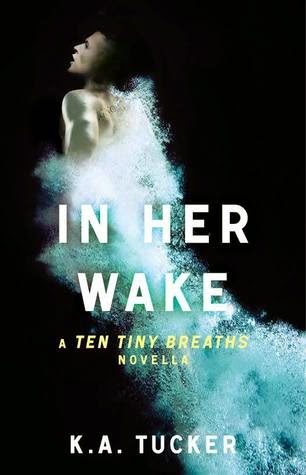 Description:
Before you knew him as Trent in Ten Tiny Breaths, he was Cole Reynolds—and he had it all. Until one night when he makes a fatal, wrong decision…and loses everything.When a drunken night out at a Michigan State college party results in the death of six people, Cole must come to terms with his part in the tragedy. Normally, he’d be able to lean on his best friends—the ones who have been in his life since he could barely walk. Only, they’re gone. Worse, there’s the shattered body of a sixteen-year-old girl lying somewhere in a hospital bed, her entire life ripped from her because of a case of beer and a set of keys.Everyone assures him that they know it wasn’t intentional, and yet he can’t ignore the weight of their gazes, the whispers behind his back. Nor can he shake the all-consuming guilt he feels every time he thinks of that girl who won’t so much as allow him near her hospital room to apologize. As the months go by and the shame and loneliness festers, Cole begins to lose his grip on what once was important—college, his girlfriend, his future. His life. It’s not until Cole hits rock-bottom that he can begin to see another way out of his personal hell: forgiveness.And there’s only one person who can give that to him…

Review:
I think this is a story that definitely needed to be told and explored.  Sometimes in life there are tragedies that happen and even though you don't realize it at the time there is a ripple effect that goes through the universe and affects everyone in one way or another.  This is Cole's story about what happened after the accident, his first steps to healing and finding a way to help Kacey heal as well.

If you've read the series you already know what is going to happen, but there is something so genuine and honest about Cole and his reaction to everything.  This is something difficult that happened to him and all those around him, but unless you were in it yourself you don't really know how to feel.  How does he have the urge to continue living?  What help does he receive and how can he help someone who doesn't want to even know he exists?  It's tough to say the least.

This slight insight is sad and surreal because you know it happened in the book but still to read about it and his burden, it wasn't easy to read but it was worth the read because you get the overall sense of his feelings before he went to Miami and tried to save Kacey and her sister.

Overall this novella was a great way to bring the story full circle, I'm just sad it took me this long to pick it up.  K.A. Tucker did a great job with this series.  Love the cover because the first one is her in the water and now it's all about Cole/Trent.
Posted by Cathy De Los Santos at 4:13 PM