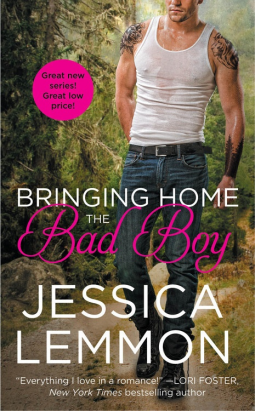 Description:
The Bad Boy Is Back
Evan Downey needs a new beginning. Since the death of his wife five years ago, the brilliant tattoo artist has shut himself away in a prison of grief that not even his work can break him out of-and what's worse, Evan knows his son Lyon is bearing the brunt of his seclusion. Moving back to the lake town of Evergreen Cove where he spent his childhood summers is his last chance for a fresh start.
Charlotte Harris knows she owes it to her best friend's memory to help Evan and his son find their way again, but she can't stop her traitorous heart from skipping a beat every time she looks into Evan's mesmerizing eyes. Charlotte is determined to stay strictly in the Friend Zone-until a mind-blowing night knocks that plan by the wayside. Now, if they're brave enough to let it, Charlotte and Evan might just find a love capable of healing their broken hearts . . .

Jessica Lemmon has an amazing new series on her plate, and I’m definitely intrigued on what will happen in the next book. I really love it when books can suck you in from the very beginning to the very end, this book definitely succeeded in this grand task.  Let’s not forget there were some amazingly steamy blush worthy scenes in this book that definitely put the icing on the cake.  And there was a lot of icing, hot stuff!!!

We meet Evan, whose wife passed away 4 years previously, and he’s moving back to this old town where they first met and his wife’s best friend and someone he is close to lives just a few doors down.  Little does he know that Charlie, she used to have the biggest crush on him but alas Rae won him out in the end.  The relationship he and Charlie have at first is very plutonic, that is until he sees her in a bikini and that’s the end of plutonic anything in Evan’s eyes.

Even pursues Charlie very strongly and without any shame the whole while Charlie is trying to resist but she just can’t.  There are a lot of unresolved issues with Charlie, she still hasn’t dealt with the loss of well pretty much every one around her and this has her putting up the world’s largest brick wall.  I don’t know why she feels this way but it’s as if she feels like she doesn’t deserve anything good.  Everyone deserves some good in their life and that includes her.  Like I said previously some of the scenes are super steamy and let me just say it brings new meaning to painting together, sexy.

I loved all the characters in this book, even the secondary characters such as Glo and Asher, I’m hoping to have their relationship revealed at one point or another because those two are like fire and ice.  Then there is also Sofie and even the librarian, haha Penis Bandits, you definitely have to read this book to read more about them.  Very funny and good stuff overall.  Like I said I couldn’t put it down and kept me sucked in the entire time to their world and their evergreen trees with the lake, I can totally picture it.  The cover is also a pretty good interpretation of how I pictured the main character and I wouldn’t mind having an Evan living two doors down from me, know what I’m saying!

Overall great start to an interesting series that will keep you hooked.  Jessica Lemmon knows the perfect recipe for a great book and I can’t wait to see what she is cooking up next!!! Go read this, you will not regret it.

Disclaimer:
I received this book from NetGalley and Forever (Grand Central Publishing), so that I may give my honest opinion and a review. Whether it is good or not please do not let it discourage you from purchasing/reading the book yourself and forming your own opinion. What might be good for me may not be good for you and vice versa. With that said, Happy Reading Everyone!!!