Review: Fall For You by Cecilia Gray 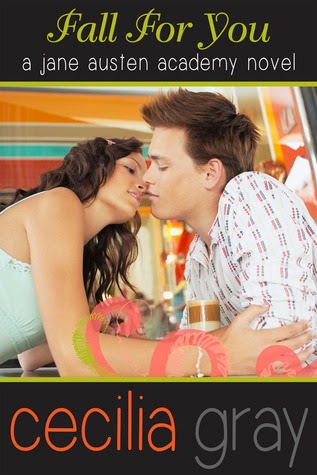 Description:
Dive into the fabulous, fun lives of six Academy girls as their friendships are tested, torn and ultimately triumph…

To say Lizzie and Dante are polar opposites is the understatement of the century. He’s a snooty Exeter transfer with more money than Google. She’s a driven study-a-holic just barely keeping up with tuition. It’s obvious that Dante thinks he’s way too good for Lizzie. And Lizzie knows Dante is a snob with a gift for pressing her buttons.

But things are changing fast this year at the Academy. And when Lizzie’s quest to stop those changes blows up in her face, taking her oldest friendship with it, she has nowhere else to turn but to Dante, with his killer blue eyes, his crazy-sexy smile, and his secrets… Secrets Lizzie can’t seem to leave alone, no matter how hard she tries…

The last thing that the girls at the elite Jane Austen Academy need is hot guys to flirt with. But over the summer the school has been sold, and like it or not, the guys are coming. And it’s about to turn the Academy—and the lives of its students—totally upside down…

Review:
OK so it's very close to the holidays and I don't know why I put these two together but Jane Austen and the holidays (period pieces) always go together for me and what better way than to celebrate this fine holiday with a Pride and Prejudice remix in this Jane Austen Academy series.  I've always adored this theme and concept of Jane Austen's book so why not bring it in to modern times and kick up the drama a notch.  Cecilia Gray does a wonderful job of that in this quick and fun read great for me and the holidays.

We meet up with Lizzie, who is still reeling from the change that is going on in her school with the addition of a male population and an overall competition for her place in her school.  Being the editor in her school's paper and very out going and of course out spoken she has no problem causing drama and getting attention from someone who would rather lay low until the end of the school year.  But with the new changes made to the school, especially now the potential for a new name to the school Lizzie goes out of her way to try and change this.

There are still the same shenanigans in this book that were in the original Jane Austen book but of course with a modern twist and that is what I love about  this series the most.  Cecilia Gray has a way of bringing this upbeat, modern twist on such a great classic.  Plus it's a really quick read that you can't help but finish in a sitting.  I think the cover is very cute too.  Although I still picture Dante (Darcy) as a much stronger more still type of character and the guy on the cover doesn't portray that as much as I would like.

So of course again all the general likeness of the Jane Austen novel but with great modern twists.  I like this book and this series because it's quick, fun, easy, likeable type of series.
Posted by Cathy De Los Santos at 4:17 PM