Review: Finding It by Cora Carmack 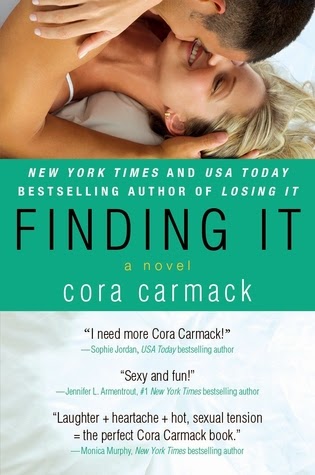 Description:
Sometimes you have to lose yourself to find where you truly belong...

Most girls would kill to spend months traveling around Europe after college graduation with no responsibility, no parents, and no-limit credit cards. Kelsey Summers is no exception. She's having the time of her life . . . or that's what she keeps telling herself.

It's a lonely business trying to find out who you are, especially when you're afraid you won't like what you discover. No amount of drinking or dancing can chase away Kelsey's loneliness, but maybe Jackson Hunt can. After a few chance meetings, he convinces her to take a journey of adventure instead of alcohol. With each new city and experience, Kelsey's mind becomes a little clearer and her heart a little less hers. Jackson helps her unravel her own dreams and desires. But the more she learns about herself, the more Kelsey realizes how little she knows about Jackson.

This by far has to be my one of my favorite series because the characters are just great on so many different levels.  I really enjoy reading anything this Cora Carmack writes because I know I will always love it.  There was adventure in this book in faraway lands that one day I hope to visit.  Talk about going off the beaten path.


We don’t follow the main characters in the first two books but here we are with Bliss’ ex-roommate Kelsey who is off to find herself in Europe or wherever her feet land her.  She’s partying away all her troubles and just trying to numb herself as she can’t begin to fathom how to really deal with anything.  Putting on a fake smile is what her family has taught her to do well.  Although even through all the fakeness Kelsey still feels that sadness inside of what happened to her when she was younger and so far no one has seen through her great acting ability that is until Jackson Hunt.


Jackson Hunt is a mystery onto himself really.  Obviously ex-military but with secrets hiding, was he kicked out? Why is he randomly traveling around? What is his story really?  That’s what drew you in and you thought oh this is such a great random meeting, and the way they met was priceless because it was too funny.  But there is something that attracts him to her and there is a lot of yes and no in this book coming from his side, but it’s never really explained until the end.  I have to say I sort of thought that was coming but I was hoping it wasn’t but was still pleasantly surprised when it did happen.  Finally the truth came out.


The two of them for a week long travelled together to random locations going off the beaten path where non touristy things would be happening.  They had their highs and their lows but all around it seemed like a definite good adventure.  I’m ready to go on an adventure myself but I don’t think I would be brave enough to stay at hostels and what not.  Too afraid of what might happen.  But overall the story was great, was not wishy washy and I read through it rather quickly.


Love Cora Carmack’s series in general and I adore the covers because they are simple and not so overpowering.  The characters are great and the experiences in this book were exciting, such as the baths, and just run-down buildings with amazing clubs in side.  This book was definitely an experience and an adventure in this book with a bit of reality and romance as the cake on the top.
Posted by Cathy De Los Santos at 1:06 PM