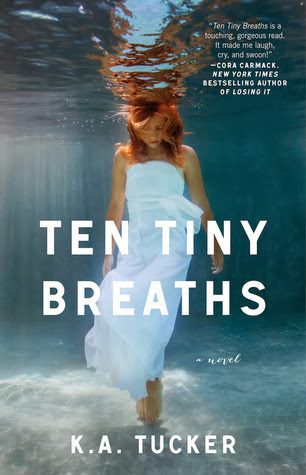 Description:
Kacey Cleary’s whole life imploded four years ago in a drunk-driving accident. Now she’s working hard to bury the pieces left behind—all but one. Her little sister, Livie. Kacey can swallow the constant disapproval from her born-again aunt Darla over her self-destructive lifestyle; she can stop herself from going kick-boxer crazy on Uncle Raymond when he loses the girls’ college funds at a blackjack table. She just needs to keep it together until Livie is no longer a minor, and then they can get the hell out of Grand Rapids, Michigan.

But when Uncle Raymond slides into bed next to Livie one night, Kacey decides it’s time to run. Armed with two bus tickets and dreams of living near the coast, Kacey and Livie start their new lives in a Miami apartment complex, complete with a grumpy landlord, a pervert upstairs, and a neighbor with a stage name perfectly matched to her chosen “profession.” But Kacey’s not worried. She can handle all of them. What she can’t handle is Trent Emerson in apartment 1D.

Kacey doesn’t want to feel. She doesn’t. It’s safer that way. For everyone. But sexy Trent finds a way into her numb heart, reigniting her ability to love again. She starts to believe that maybe she can leave the past where it belongs and start over. Maybe she’s not beyond repair.

But Kacey isn’t the only one who’s broken. Seemingly perfect Trent has an unforgiveable past of his own; one that, when discovered, will shatter Kacey’s newly constructed life and send her back into suffocating darkness.


I really and truly do not know why I waited this long to read this book.  It was riveting and addicting and just something that would stay on my mind throughout the night and day when I was not reading the book.  It was constantly in my thoughts and the author did an amazing job writing this book and bringing out the true emotion of people who have gone through a tragedy and how they have dealt with this.


It’s very true when people say that one little thing sets everything else in motion, very much the domino theory.  One tiny decision can affect the lives of so many people forever.  It’s amazing and terrifying at the same time, this is what Ten Tiny Breaths is about.  I never read what the blurb was on this book but had always loved the cover and I finally decided to pick it up and read it and I’m thankful that I did because I’m about to go run and read the second book in the series and desperately await the third book I’m sure.


We meet Kacey and Livie as they are travelling to Miami to run away from their aunt and uncle who are definitely not great role models but they were the ones who took them in after the tragic accident that cost the lives of both their parents, and really too many people.  Drunk driving is not something anyone can do and driving drunk can change everyone’s lives forever, always make sure there is someone sober to drive, that’s all I’m saying.  Kacey is a very broken person although she will constantly say that she isn’t, with her rage and kick boxing and not being able to touch anyone’s hands or should I say anyone touch her hands.  I think that’s one of the saddest things, the reason behind it and you definitely have to read the book to find out what that is because it too will break your heart.


They move to this new place and start fresh, things start looking up for them and they have even made some friends, and of course Kacey has met Trent, the new neighbor.  The relationship between them is an extremely intense one.  There is so much heat and passion there with so many brakes stopping them that it kept making me gasp with need for them to finally do the deed.  I’m talking intense teasing, so bad lol but in a good way.  Nothing over the top sexually but still intense.


Things happen between Kacey and Trent and he just keeps pushing her to get help for the tragedies that happened in her past, but it just makes her push him away until she finally breaks and then there’s a great bout of happiness for a while.  Until the inevitable happens, because I knew it would happen but even still it hurt to find out I was true cause I could only imagine how Kacey was feeling.


There is a long healing process when tragedies happen and some people deal with things differently, it’s all about finding what works for you in a healthy way.  I’d like to think that everyone finds a little peace by the end of the book but there are still some unresolved issues and I can’t wait to start the next book.  Amazing read that will keep you thinking about things in your life and just in life in general.
Posted by Cathy De Los Santos at 1:34 PM