Review: Stir Me Up by Sabrina Elkins 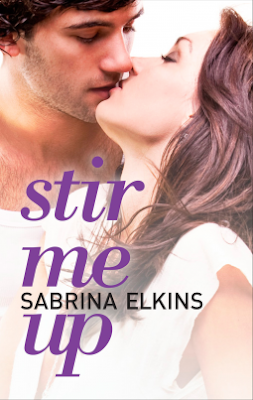 Description:
A Harlequin TEEN E-Original Title:  Cami Broussard has her future all figured out. She'll finish her senior year of high school, then go to work full-time as an apprentice chef in her father's French restaurant, alongside her boyfriend, Luke. But then twenty-year-old ex-Marine Julian Wyatt comes to live with Cami's family while recovering from serious injuries. And suddenly Cami finds herself questioning everything she thought she wanted.

Julian's all attitude, challenges and intense green-brown eyes. But beneath that abrasive exterior is a man who just might be as lost as Cami's starting to feel. And Cami can't stop thinking about him. Talking to him. Wanting to kiss him. He's got her seriously stirred up. Her senior year has just gotten a lot more complicated….

Contains mature content and some sexual situations. Suited for readers 16 and up.

"Fun, steamy, and leaves you hungry for more. Sabrina Elkins nails the vulnerability of becoming an adult and the choices that come with growing up."
—Katie McGarry, author of Dare You To

Review:
Can I just start off by saying how much I wish this book was a series, and you'll see why later.  Debut author Sabrina Elkins had me addicted from the very beginning.  Everything about this book was fascinating, from the characters, the scenarios to the scenery and I really didn't want it to end.  I want to go on an adventure with these two characters.

We meet Cami who is seventeen and aside from going to school she works with her father in the restaurant he owns, She is constantly in the lookout for his approval on the dishes she creates but they are few and far between, and Cami is also dating one of the line cooks, Luke.  Who doesn't seem like a very great guy to begin with but you will have to read to find out more about him.  Seems to me he just wanted one thing. Men!

In comes Julian who was just hurt in the way and is now an amputee vet, he's the 20 year old nephew of Cami's stepmother.  It's not really that complicated but when he comes back he's very grumpy and angry and doesn't know how to deal with things in a nice way. After all he just lost his leg. I enjoyed seeing his struggle with the after effects of the experience he had in Afghanistan. People don't seem to realize how hard it is over there and the soldiers that return are never quite the same.  It was good to read about this and I enjoyed it as everyone is different I think after he finally accepted what happened to him things seemed to go more his way.  But it's still hard.

While living in the same house as Cami, yes in her bedroom because he needed the first floor access they started their relationship quite heated but not in a good way more like yelling constantly, but we all know that's just a form of really good foreplay sometimes.  But eventually they get over this and find that connection, that need they have for one another.  This book explored a lot about young adults, them finding their way in the world, figuring out what they were going to do with their lives.  But this book also explored the fear that teens feel before they engage in sexual relations, some people might not care and just get it over with but there is a lot of thought that girls go through before they commit and sometimes it's harder for others.

I rather enjoyed their debates with one another and the cooking in this book sounded delicious, even when it was a disaster it still sounded delicious.  Bonus was there are recipe's in the back of the book and I might have to try one myself.  This was one of the major pluses that I enjoyed in the book, sometimes I feel like cooking for or with someone is just another great way to connect with one another.

Overall this book was amazing,  I couldn't put it down and had to read it as fast as possible, but I will say I'm sad it's done and wish there was more.  There needs to be another book, if not the continuation of Cami and Julian then at least to find out what happens with Cami's best friend who goes off to Hollywood to star in a movie, as she is desperately trying to find love as well.  I think that would make a great second story.  Alright I can't praise this book enough, did I mention how I couldn't put it down (I mean on my phone walking down the sidewalk reading the book hoping I don't run into something or someone good).

Disclaimer:
I received this book from NetGalley and Harlequin TEEN, so that I may give my honest opinion and a review. Whether it is good or not please do not let it discourage you from purchasing/reading the book yourself and forming your own opinion. What might be good for me may not be good for you and vice versa. With that said, Happy Reading Everyone!!!
Posted by Cathy De Los Santos at 9:21 AM