Review: The Forever of Ella and Micha by Jessica Sorensen 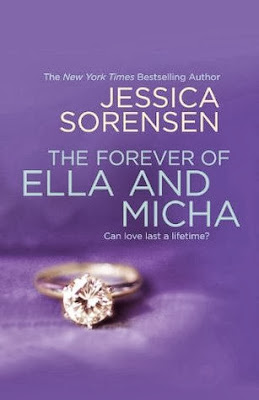 The Forever of Ella and Micha
By: Jessica Sorensen
Release Date: October 15, 2013
Series: The Secret #2

Description:
Ella and Micha have survived tragedy and heartbreak. When they're together, anything seems possible. But now they are thousands of miles apart, and managing their long distance relationship will put their love to the test.

Ella is back at school, trying hard not worry so much about her future. But with her father in and out of rehab, she's having a hard time making it through the days. All she wants is Micha by her side, but she refuses to let her problems get in the way of his dreams.

Micha spends his days touring the country with his band, but deep down he knows something is missing. Being away from Ella is harder than he thought it would be. He wants her closer to him-needs her with him. But he won't ask her to leave college, just to be with him.

The few moments they do spend together are intense and passionate, but it only makes it more difficult when they have to part. They know they want to be together, but is wanting something enough to get them to their forever?

Review:
This continuation of Micah and Ella was a great book and Jessica Sorensen really kept the book going.  There were times where I wanted to smack some people because it’s like get out of that funk already! That’s the only part that was annoying but it could be because I don’t really know much about mental health issues and this book touches upon it, as well as different addictions and how people deal with things that are hard in life.

We are back with Micah and Ella and of course their sidekicks Lila and Ethan.  They have their continuous ups and downs and it’s all about how to deal with things in life.  Ella on one hand freaks out and runs away at the first sign of something serious, either that or goes into a deep depression.  While on the other hand Micah deals with his issues by picking up a bottle, something Ella isn’t fond of considering her father an all.  But even he gets help and it’s tough but it had to be done.  Lila and Ethan are still a mystery although you can totally tell how much they enjoy each other’s company and I can’t wait to read their story in the next book in this series.

There are a lot of moments in this book that made me smile and some that made me sad, but overall the back and forth was getting too much.  They obviously belong together so why fight it.  Let the past go and move on with the future.  I think by the end they are able to do this but the getting there was an enjoyment to read.  This book took me a little longer to get through, I’m not sure if I was slowly not feeling it or just didn’t have sufficient time to read it quickly but I know it took me longer than the first book.  I think the repetitiveness got to me.  Although sure there were more issues that were resolved all around, but still.

Don’t get me wrong I enjoyed the book because I really like Sorensen’s writing style and the bad boy in this book with his singing is just dreamy and worth it all around just for him.  It’s just the wishy washy that gets annoying.  I’m ready to read the next one though hopefully will bring life back into the series that I was so enjoying.  It was definitely angst at its best but again it was good to see some things resolved and bring a smile to your face.  And you know what I’m grateful for, bad boys with lip rings lol.

I really like the new covers for this series because it’s simple and attractive to look at other than the typical couple because I’d much rather imagine what Micah and Ella look like in my mind than a representation of them.  Good read, good series and on to the next one!
Posted by Cathy De Los Santos at 3:35 PM