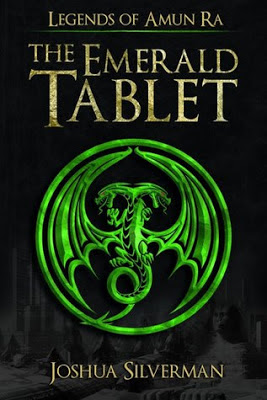 Description:
Leoros doesn't have many friends. The son of a scientist and archaeologist, he is constantly on the move. But when his parents make a startling discovery in Egypt, Leoros' world is turned upside down.

When an archaeologist discovers the mythic Emerald Tablet buried beneath Egypt’s desert, her son decodes the ancient text leading him to a distant world.

On that world, a slave girl begins a journey towards a destiny she cannot imagine. But when an ancient foe rises from the ashes, they will be brought together by forces neither understands.

Leoros, who dreams of being like the heroes in the comic books, must fight to unlock the secrets of the universe to save a people he never knew existed.

Atlantia, whose bloody visions wake her in the night, senses the darkness coming.

Together they will face an enemy with the power of dark energy, lose a mentor to the assassin’s blade, and be betrayed by someone they trust. Their fight for the future is just beginning, and before it is over, a final sacrifice must be made. When the darkness comes, will they stand and fight or will they join it?

There is darkness in everyone.

First let me start off by saying that this is not my typical kind of read, but I'm so glad that the author gave me the opportunity to review this book because it was an adventure and a half that I thoroughly enjoyed from beginning to end.  This sci-fi/fantasy adventure takes you from the past and mythological, to the present and even into the future all at the same time, while on two different planets.  I especially loved the rich imagination and references to the Egyptian/Greek beliefs in Gods and prophecies that just made it more exciting for me as I love reading anything about that time period and learning more about ancient history.

We meet Leoros who is in present day Egypt with his family while his mother is on an archeological dig looking for the emerald tablet, which she does end up finding and giving to her son along with a stone she finds lying next to the pillar.  This pillar calls out to Leoros and he decides to answer the call as he is transported to another planet where they believe he will be the savior of their world.  Hence begins the adventure Leoros has been waiting for as he is an avid sci-fi fan and definitely believes in being a hero.  Here he meets Pythos and his students as they are training to become Priests of Amun.  He also meets Atlantia who while being a servant he can't seem to pull away from her; they both feel a connection there that is apparent to even Pythos.

The other trainees (Dio, Cadmus, Kesi and Kem) are very hesitant towards Leoros because they believe that they should receive more attention, but this new person comes in and Pythos seems to show a stronger preference towards Leoros.  This of course causes a slight rift in the group of four that have been training since they were children.  There is definitely a lot of mistrust and uncertainty about who Leoros is and what he can actually do.  There are times when it seems they might get along, but still there is tension there and it grows throughout the book until it deteriorates because of certain actions that take place.

The war is coming and Pythos knows it, with the Priests of Amun dying one by one it's only a matter of time before everything breaks loose.  There are a group of events that happen, that have been planned for a very long time as King Osiris is back to take his power, he's left his exile and with the help of his daughters he's ready to take over completely.  His daughters, while one was completely obvious the other was a surprise to many.  Because of the events these two girls put into place the wheels have started turning, a war has begun and they have literally pit brother against brother.   Good versus evil, who will win, what will become of Potora and will Leoros succeed.  There are a lot of trials and tribulations that he goes through, especially when he finally meets Osiris face to face for the first time.

There is unquestionably a lot of action in this book, and the adventure will make your head spin in a good way.  The author did a really amazing job in describing the different locations, the myths, the legends and especially the different characters.  Each character is represented thoroughly throughout the book, you get to know who they are and what they stand for and that is a rarity as usually in secondary characters you only get the gist of what they are about but Joshua Silverman has bought them to life and made them just as important as Leoros.  I really enjoyed this rollercoaster of an adventure.

Disclaimer:
I received this book from the author, Joshua Silverman, so that I may give my honest opinion and a review. Whether it is good or not please do not let it discourage you from purchasing/reading the book yourself and forming your own opinion. What might be good for me may not be good for you and vice versa. With that said, Happy Reading Everyone!!!