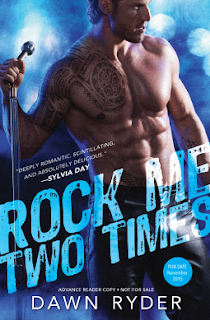 Description:
First in Dawn Ryder’s sizzling new Rock Band series.
A partnership with the hottest new rock band, Toxsin, is a major opportunity for Kate's small custom leather shop, but she's determined to resist her burning attraction to the lead guitarist, Syon Braden. Sex is a commodity in his world, and that's just not enough for her. Or so she thought.
With the multiplatinum success of his band, Syon thought he had everything he'd ever wanted…and then he met Kate. He knows that sleeping with her could distract him from his music and even interfere with his close bandmate friendships, but despite all this, Syon just can't seem to keep his mind—or hands—off of her…
Rock Band Series:
Rock Me Two Times (Book 1)
Rock Steady (Book 2)

Lots of Leather, lots of Rock n Roll attitudes and some super steamy intimate scenes, this is a rock stars life and you’re living in his world throughout the entire book.  Dawn Ryder did a great job depicting this lifestyle and throwing in some deceitfulness and some real emotion into all the characters.  I’m intrigued about the rest of the band and will be happy to read about them in the next book.  But for now let’s focus on Kate and Syon.

Kate is a part owner in a custom leather shop and when something happens to another employee she has to take over their account this one time, which leads to a full time costumer for one of the biggest rock bands around.  Even if we didn’t read any of the lyrics to the songs it was described so intensely it kind of in my mind reminded me of Queen of the damned soundtrack all raw and emotional and totally addicting rock music.  If that makes sense to anyone else.  Anyway so Syon aka the Marquis is intrigued by Kate.  Their dominating relationship with one another is an interesting read, especially when you throw Ramsey into the mix. He and Syon have been friends and family to one another for a long time so to see Kate come between them in a way is sweet because you can see how strong their bond is.

Kate tries to fight it as much as she can, but hello rock star, super-hot, super yum who could possibly resist that?  I know I couldn’t.  There were some very steamy, sexy, hot scenes in this book and I knew there would be a little risqué action going on and that’s one of the main reasons I picked this book up, let’s not forget that cover, super yum! Anyway there are some issues that arise between Kate and Syon, but you really have to read the book to find out what they are.  It was a good read, kept you interested in the character from beginning to end.  I’m not one for reading such steamy books like this so I did end up skipping a few pages at the end because I was over it, but again that’s just me.  Sometimes I just want to get to the story, but even still I liked it and am definitely interested in reading the rest of the series.  Especially Taz.

Great book, great story, hot cover and I would definitely recommend this to anyone!


Disclaimer:
I received this book from NetGalley and SOURCEBOOKS Casablanca, so that I may give my honest opinion and a review. Whether it is good or not please do not let it discourage you from purchasing/reading the book yourself and forming your own opinion. What might be good for me may not be good for you and vice versa. With that said, Happy Reading Everyone!!!