Review: The Queen by Kiera Cass 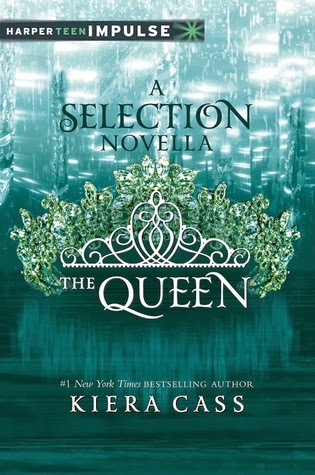 Before America Singer's story began, another girl came to the palace to compete for the hand of a different prince….
Don't miss this digital original novella set in the captivating world of Kiera Cass's #1 New York Times bestselling Selection series. This prequel story takes place before the events of The Selection and is told from the point of view of Prince Maxon's mother, Amberly. Discover a whole new Selection with this inside look at how Maxon's parents met—and how an ordinary girl named Amberly became a beloved queen.
Review:
I love this world of the Selection and when I saw there were more novella's around I just had to pick it up.  This one is all about Maxon's mother, Amberly.  It was sweet, adorable and so very interesting to see her story of the time when she was in the selection.  Even back then when girls were fighting for the Prince's attention there was drama, not as bad as America's but even still it was a different time and it was fun to explore.

Seeing their relationship grow, and Prince Clarkson's little tests for Amberly were adorable, of course because she passed them.  It was cool to see how different the queen was back then, how much her confidence has bought her and how much they really do care for one another.

Overall it was a great novella, a great insight into Maxon's parents and how they got together and just sweetness all around.  It was very comforting seeing how much they cared for one another.  So happy she had Maxon too, because really then there wouldn't be an America to read about ha.
Posted by Cathy De Los Santos at 10:30 AM