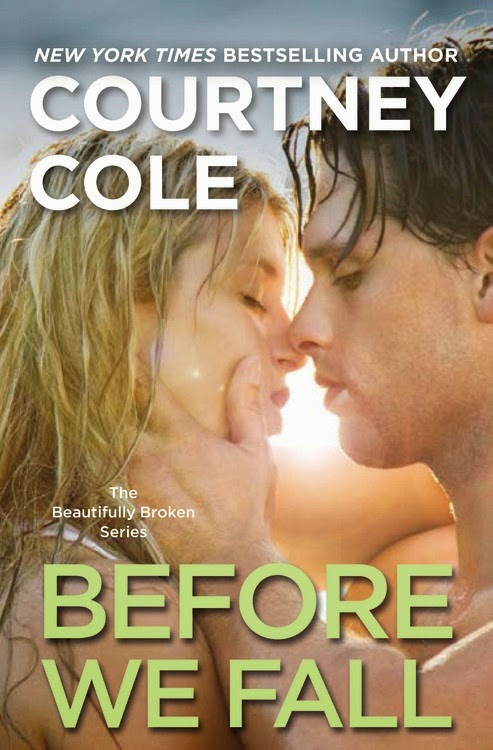 Sometimes before we fall . . . we fly.
One dark moment was all it took to turn twenty-four-year-old Dominic Kinkaide's world black. On the night of his high school graduation, a single incident changed him forever, and he became a hardened man-famous in the eyes of the world, but tortured inside. Now all he cares about is losing himself in the roles that he plays.

At twenty-three years old, Jacey Vincent doesn't realize how much her father's indifference has affected her. She is proof that sometimes it isn't one specific moment that wrecks a person, but an absence of moments. She tries to find acceptance in the arms of men to fill the void-a plan that has worked just fine for her, until she meets Dominic.

When jaded Dominic and strong-willed Jacey are thrown together, the combination of his secrets and her issues turns their attraction into the perfect storm. It could change their lives for good-if it doesn't tear them both apart . . .

Courtney Cole is a New York Times and USA Todaybestselling author who lives near Lake Michigan with her family.  She's always working on her next project... or staring dreamily out her office window.

Social Media Links:
Website |Facebook |Twitter| Goodreads
Excerpt:
Jacey is standing still in the middle of the room, dressed in her uniform, letting a party guest lick salt off of her forearm for a tequila shot. She’s heavily made up tonight- thick mascara, red lipstick.  She smiles up at him with those red lips and a fake smile and as she does, she catches sight of me.
She freezes in shock, although what the fuck?  I’m the one living here temporarily.  I belong here, she doesn’t.
Suddenly, a guy comes rushing up to me, someone I don’t know.  A very drunk someone.
“Dude, can you sign my shirt for my girlfriend?  If I take home your autograph, I’ll get laid for a month.”
He grabs at my arm and I shake him off in annoyance.
“Dude.  If you were lucky enough to get invited here, then you should know not to approach anyone for autographs.”
I’m not usually so rude to fans.  But my mood gets the better of me. The guy stares at me, stunned, and I continue on my way.  As I do, I feel Jacey’s gaze.
She pulls her arm away from the guy, sets down her tray of shots, and makes a beeline for me.
I turn my back on her, intent on continuing up the stairs without acknowledging her, but she won’t have it.  She grabs my arm, forcing me to look at her.
“ Are you all right?” she demands.  “That was pretty harsh.”
I glance down at her, into her brown eyes and find her to be sincerely concerned.  I must look seriously rattled if she noticed that something is wrong. She barely knows me.  Her fingers are warm on my arm and for a minute, I waver.
She’s warm and soft and concerned.  I know what that might turn into.
A wild night that will make me feel better.
Women are all the same, they want to fix what is broken and they’re willing to do anything to accomplish that.  I never talk about my past or anything at all about me, but women can still sense that I’m fucked up.  What they don’t understand… is that I’m unfixable.
I stare down at her again, shaking my head.
“I’m fine.  Don’t worry about it.”
But she looks at me again, really looks at me, her brown eyes probing mine.  “I don’t think you are.  What happened?”
“Why does it matter to you?” I ask, before I can stop myself.
Because something about her makes me think that it does somehow matter to her and not just because I’m Dominic Kinkaide.   Everything I’ve seen of Jacey is wild and untamed… she works for Saffron, pushes cops around, gets dressed in parking lots and lets men lick salt off her body for tequila shots.
Yet at the same time, she seems warm and real.  I haven’t forgotten how she shoved her way in between Cris and I and shielded my body with her own.  She’s a puzzle.
Jacey looks confused by my question.
“It matters because you’re not some stranger off the street. You look seriously upset.   Of course I’m going to ask you if you’re alright.  Who wouldn’t?”
Most of the people I know in Hollywood, I think.
But I don’t say it.  Instead, I turn my back and start up the stairs again.  I don’t fucking answer to her or anyone else.
“Do you need anything?” Jacey’s voice is hesitant behind me.  “An ice pack or anything? That bruise on your cheek looks like it still hurts.”
I pause, not looking at her.  Instead I remember her bare leg, stretching toward the sky while her tiny uniform shorts slide over it.  The mere memory of the way she’d undressed right out in the open sets my pulse to racing.
Yeah, there’s a bunch of things I need, but only one thing that will take my mind off the reason that I need them.
“Yeah, I need something.”
There is a moment of silence between us, then another.
Finally she asks, “And that is?”
I turn back around slowly, looking her up and down until my eyes freeze upon hers and stay there.  Hers are dark and sincere, waiting for me to say something. She has no idea what kind of person I am.  She has no idea that I’m just a shell, completely empty inside.
If she did, she would run far, far away.
I stare into her eyes as I move closer and she doesn’t look away.
I step back down until we’re on the same step and her back is against the wall.  I press against her, close enough that my rigid dick digs into her hip.
Giveaway