Review: Crashing into You by B. D. Rowe 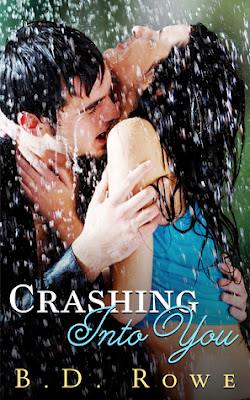 Description:
Bookish college sophomore Sydney Baker wants Evan Taylor with every ounce of her being. The hottest stud on campus, Evan is six foot four, ripped, stacked with muscles. He's even easy to talk to.

But when Melanie tragically dies after a night of wild partying, Sydney and Evan turn to each other in a time of intense grief. And it doesn't take long for their close friendship to blossom into something more.

Unfortunately for Sydney, secrets from the past soon put her relationship with Evan to the test. Especially when a sexy blonde freshman makes her way into Evan's life, and tries to rip away everything Sydney holds close to her heart.

Review:
So I am not one hundred percent sure how I felt about this book.  I thought the characters were a little one sided and I didn't really feel for them as much as I wanted to.  I think it could have been a great story and towards the end it could definitely have gone single white female but it just was.

We meet Sydney who is now someone who doesn't drink because of what happened when she was in high school and drunk driving, not her but still she was involved.  Ok that's very honorable not wanting to drink and all but the way she went about it was slightly annoying.  She needed to respect other people's opinions a little more.  The tragedy with her roommate was weird all around because really why wouldn't you check on your roommate at all, just to be curious.  But any who it's all about the relationship she wants with Evan, who was dating her roommate.

Evan, sounds like a popular guy who isn't really sure what he wants or just likes to go with the flow as long as he gets something out of it.  They throw the word love out there a little too easy.  It just doesn't seem connected at all because one minute she's like I can't the next she's all like I love you.  Very confused girl that's for sure.

Overall it took me a while to get through it and it just wasn't believable.  I didn't enjoy or relate to the characters.  Not even the gay roommate as he seemed like a very forced characters.  I really like the cover but I just don't see Sydney and Evan in it.

Disclaimer:
I received this book from NetGalley and B.D. Rowe so that I may give my honest opinion and a review. Whether it is good or not please do not let it discourage you from purchasing/reading the book yourself and forming your own opinion. What might be good for me may not be good for you and vice versa. With that said, Happy Reading Everyone!!!
Posted by Cathy De Los Santos at 7:18 AM