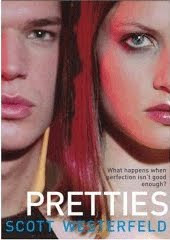 After I finished the first book in the series I had to go out and get the rest so this is the second book and it did not disappoint. Tally's adventures continued on as a Pretty now where she tries to remember her life in the smoke and what is right and what is wrong. She meets Zane the leader of the Crims who helps her find a letter of consent that she had sent herself to take the cure because being pretty comes at a price. Both take a pill thinking it will have the same affect but it doesn't and Tally gets them out to the smoke. It's a great adventure and one I would love to see on the big screen.
4 out of 5 stars.
Posted by Cathy De Los Santos at 8:18 AM